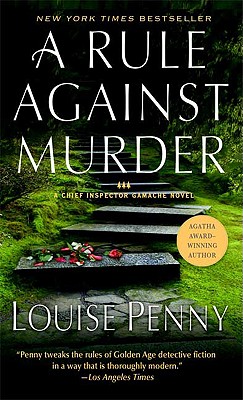 “This is the fourth book in the utterly charming, utterly compelling series featuring Quebec's Chief Inspector Gamache. In this one, he and his wife visit an isolated resort for their wedding anniversary, becoming embroiled in the inner workings of a more-than-dysfunctional family. Penny's gorgeous prose and stunning skill with character development take this book to the top of the genre.”
— Robin Agnew, Aunt Agatha's Ltd., Ann Arbor, MI

It is the height of summer, and Armand Gamache and his wife are celebrating their wedding anniversary at an isolated, luxurious inn not far from the village of Three Pines. But they’re not alone. The Finney family—rich, cultured, and respectable—has also arrived for a celebration of their own…

As the heat rises and the humidity closes in, some surprising guests turn up at the Finney reunion…and a terrible summer storm leaves behind a dead body. Now it’s up to Chief Inspector Gamache to unearth long-buried secrets and hatreds hidden behind polite smiles. The chase takes him to Three Pines—into the dark corners of his own life, and finally to a harrowing climax.

Louise Penny, author of the "New York Times" bestselling Chief Inspector Gamache novels, worked as an award-winning journalist for the Canadian Broadcasting Corporation before leaving to write crime fiction. Her first mystery, "Still Life," was the winner of the New Blood Dagger and the Arthur Ellis, Barry, Anthony, and Dilys Awards; and was also named one of the five Mystery/Crime Novels of the Decade by "Deadly Pleasures" magazine. Louise went on to become the first writer ever to win the Agatha Award for Best Novel four times, as well as an Anthony Award for "The Brutal Telling" and the Dilys, Arthur Ellis, Macavity, and Anthony Awards for "Bury Your Dead." Her novels are bestsellers in the United States and Great Britain and have been translated into twenty languages. She lives with her husband, Michael, in a small village south of Montreal.

“Penny applies her magic touch…giving the village mystery an elegance and depth not often seen in this traditional genre.”—Marilyn Stasio, The New York Times Book Review

“Decades from now, I suspect we’ll look upon the works of Louise Penny and find all sorts of marvels....It’s the way she tweaks the rules of Golden Age Detective Fiction but doesn’t shy away from attitudes, mores, and slang that is thoroughly modern....The temptation is to scarf Penny’s books like potato chips but it’s ever wise to savor each bite and let the flavors fill your tongue.”—Sarah Weinman, Los Angeles Times

“This latest treat will keep fans salivating in anticipation, savoring each delectable morsel and yearning for more.”—Kirkus Review (starred review)

“Readers who haven’t discovered Louise Penny and her Armand Gamache series yet are in for a treat.”—Booklist (starred review)

“At least two people are waiting very impatiently for this review to be done so I can pass the new Louise Penny along to them. With just her fourth book, she already has that kind of (well-deserved) following….After a fabulous summer storm, a body is found and Gamache’s homicide team moves into the luxury hotel to sift clues and dine on grand hotel food. (Even the snacks in these books are mouthwatering.)” —Charlotte Observer

“Powerful and uniquely imaginative, with prose that approaches the poetic…Penny concocts an intricate and intriguing plot and peoples it with credible characters and the continually fascinating Gamache.”—Richmond Times-Dispatch

“Penny sets up an ingenious, impossible crime puzzle for the reader.” —The Denver Post

“What a delight to have Inspector Gamache back on the scene. Penny does a superb job.” —Romantic Times

This feature require that you enable JavaScript in your browser.
END_OF_DOCUMENT_TOKEN_TO_BE_REPLACED

END_OF_DOCUMENT_TOKEN_TO_BE_REPLACED

This feature require that you enable JavaScript in your browser.
END_OF_DOCUMENT_TOKEN_TO_BE_REPLACED