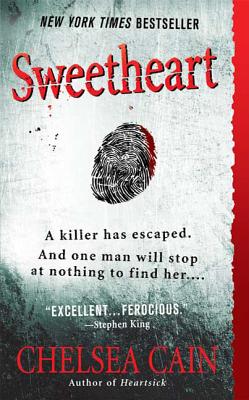 This is book number 2 in the Archie Sheridan & Gretchen Lowell series.

Portland detective Archie Sheridan, the former head of the Beauty Killer Task Force, hunted Gretchen Lowell for years before she kidnapped him, tortured him, and then let him go. Now that she is behind bars, Archie is finally piecing his life back together. He's returned home to his ex-wife and their two children. But no matter how hard Archie tries, he just can't stop thinking about Gretchen…

When the body of a young woman is discovered in Forest Park, Archie is reminded of the first corpse he discovered there a decade ago: it turned out to be the Beauty Killer's first victim, and Archie's first case. Then, the unthinkable happens: Gretchen escapes from prison, and once the news breaks, all of Portland goes on high alert…but secretly, Archie is relieved. He knows he's the only one who can capture Gretchen—and now he has a plan to get out from under her thumb once and for all. Even if it means becoming her last victim…

“Cain's debut Heartsick had even the most jaded thriller fans sleeping with the lights on. She tells an equally frightening story in Sweetheart.” —USA Today

“A sharp psychological inquiry into evil and obsession, as well as a deeply unhealthy love story.” —The Seattle Times

This feature require that you enable JavaScript in your browser.
END_OF_DOCUMENT_TOKEN_TO_BE_REPLACED

END_OF_DOCUMENT_TOKEN_TO_BE_REPLACED

This feature require that you enable JavaScript in your browser.
END_OF_DOCUMENT_TOKEN_TO_BE_REPLACED