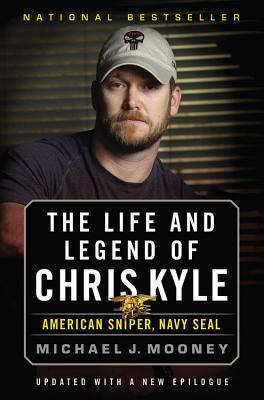 A brutal warrior but a gentle father and husband, Chris Kyle led the life of an American hero. His renowned courage and skill in military service earned him two nicknames -- The Devil among insurgents and The Legend among his Navy SEAL brethren -- but his impact extended beyond that after he came home from combat and began working with fellow veterans.

Journalist Michael J. Mooney reveals Kyle's life story, from his Texas childhood up through his death in February 2013. Mooney interviews those closest to the late SEAL and also sheds light on the life of the suffering veteran who killed Kyle. The Life and Legend of Chris Kyle is a candid, essential portrait of a celebrated warrior -- a man about whom a movie has only added to the legend.

Michael J. Mooney is a staff writer at D Magazine. He also writes for GQ, ESPN The Magazine, Outside, and Grantland. He is a graduate of the Mayborn School of Journalism, and is on the advisory committee of the Mayborn Literary Nonfiction Conference. His stories have appeared in The Best American Crime Reporting and multiple editions of The Best American Sports Writing. He lives in Dallas with his fiancée, Tara, and their retired racing greyhound.

"An honest portrayal of a man whose memorial service brought thousands of people to Cowboys Stadium-the most celebrated war hero of our time."
—The Blaze

"The Life and Legend of Chris Kyle tells Kyle's story.... This is the ending that needed to be written."—Publishers Weekly

This feature require that you enable JavaScript in your browser.
END_OF_DOCUMENT_TOKEN_TO_BE_REPLACED

END_OF_DOCUMENT_TOKEN_TO_BE_REPLACED

This feature require that you enable JavaScript in your browser.
END_OF_DOCUMENT_TOKEN_TO_BE_REPLACED