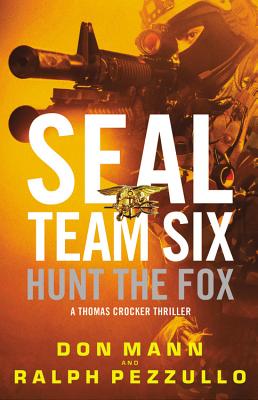 This is book number 5 in the A Thomas Crocker Thriller series.

On the way to a meeting with a CIA source in Istanbul, Chief Warrant Officer Crocker noticed he's being tailed. He suspects the men tracking his movements are members of Syria's intelligence agency, the Mukhabarat - their presence a sign of the region's increasing volatility.

Syria's government is unraveling, with ISIS dangerously in the mix. Mohammad al-Kazaz, aka the Fox, leads the most threatening of the ISIS factions. The Fox has obtained a shipment of chemical weapons that would bring devastation to an already crumbling region. Crocker and his squad must set off deep into enemy territory with limited intel, no chance of rescue, and only one shot at saving thousands of lives.

Don Mann (CWO3, USN) is the author of the national bestseller Inside SEAL Team Six and a former Navy SEAL. He lives in Virginia.

"Believable . . . Give[s] real insight into the hurdles, practices and lives of this band of warriors regarding black-op missions."
—Elise Cooper, Military Press

PRAISE FOR THE SEAL TEAM SIX SERIES:
The pace is relentless, and the inside knowledge of how the SEALs operate again gives this series its appeal. . . . For action fans, Crocker continues to deliver."
—Booklist, on Hunt the Jackal

"Pulse-pounding reads filled with the kind of knowing, immersive detail that can only come from someone with real-life experience in the field. A great series."
—Howard E. Wasdin, New York Times best-selling author of SEAL Team Six: Memoirs of an Elite Navy SEAL Sniper

"A riveting and accurate description of how special operations units actually conduct counterterrorist operations in the field. . . . If you are interested in reading a suspenseful, action-filled novel written by the 'real deal' instead of some amateur wanna-be, pick up this book, or any of those in the SEAL Team Six series."
—James Blount, former supervisor at the Central Intelligence Agency

This feature require that you enable JavaScript in your browser.
END_OF_DOCUMENT_TOKEN_TO_BE_REPLACED

END_OF_DOCUMENT_TOKEN_TO_BE_REPLACED

This feature require that you enable JavaScript in your browser.
END_OF_DOCUMENT_TOKEN_TO_BE_REPLACED