The Next Great Paulie Fink (Paperback) 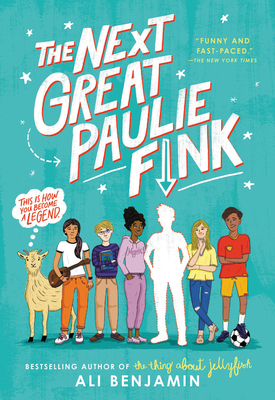 In this acclaimed novel by the author of the award-winning, bestselling The Thing About Jellyfish, being the new kid at school isn't easy, especially when you have to follow in the footsteps of a legendary classroom prankster.

When Caitlyn Breen begins her disorienting new life at Mitchell School--where the students take care of real live goats and study long-dead philosophers, and where there are only ten other students in the entire seventh grade--it seems like nobody can stop talking about some kid named Paulie Fink.

Depending on whom you ask, Paulie was either a hilarious class clown, a relentless troublemaker, a hapless klutz, or an evil genius. One thing's for sure, though: The kid was totally legendary. Now he's disappeared, and Caitlyn finds herself leading a reality-show-style competition to find the school's next great Paulie Fink. With each challenge, Caitlyn struggles to understand a person she never met...but it's what she discovers about herself that most surprises her.

Told in multiple voices, interviews, and documents,this funny, thought-provoking novel from the bestselling author of The Thing About Jellyfish is a memorable exploration of what makes a hero--and if anyone, or anything, is truly what it seems.

Ali Benjamin is a New York Times bestselling author and National Book Award Finalist for The Thing About Jellyfish, and the co-writer for HIV-positive teen Paige Rawl's coming-of-age memoir Positive as well as Tim Howard's national bestseller The Keeper. She lives near Williamstown, Massachusetts.

"A funny and fast-paced romp."
—The New York Times

* "A witty, tender, and utterly engaging modern school story that draws on the wisdom of the ages."—School Library Journal, starred review

* "Genuinely original, the novel offers thoughtful perspectives on friendship, accepting change, and the many rewarding guises of storytelling, as well as a fully gratifying ending that the characters don't see coming."
—Publishers Weekly, starred review

"Takes the reader on a journey of self-discovery."—School Library Connection

"An inspirational story about finding your place in an unfamiliar community and learning that normal is not always better."—The Denver Post

"You'll love this new favorite about being the new kid at school, and dealing with bullies, and becoming something different."—Romper

*"Reminiscent of works by Jennifer L. Holm and Sharon Creech...a shining example of the highs and lows of early adolescence."—Publishers Weekly, starred review

*"Clean, fluid writing that is highly accessible, yet rich with possibilities for discussion.... An uncommonly fine first novel."—Booklist, starred review

*"Just-right pacing, authentic voices and characters, beautifully crafted plot, and superb writing. Readers will find that this story lingers with them after the book is closed."—VOYA, starred review

"There are...a lot of children who might not only benefit from this book but also find themselves deeply moved by it."—New York Times Book Review

This feature require that you enable JavaScript in your browser.
END_OF_DOCUMENT_TOKEN_TO_BE_REPLACED

END_OF_DOCUMENT_TOKEN_TO_BE_REPLACED

This feature require that you enable JavaScript in your browser.
END_OF_DOCUMENT_TOKEN_TO_BE_REPLACED