Biden: The Obama Years and the Battle for the Soul of America (Hardcover) 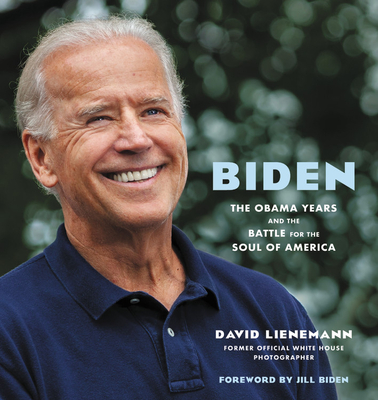 The visual chronicle of Joe Biden's eight years as vice president to Barack Obama, revealing in intimate detail who the President is as a father, friend, and leader

This book captures the core of who Joe Biden is as a lifelong public servant–featuring photographs from his eight years as one of America's most consequential vice presidents and partner to Barack Obama.

These visually arresting photographs and behind-the-scenes stories show Biden stepping into his own as a leader always ready to guide a nation in distress. They also reveal a new dimension to Biden's humanity–as a man whose decency and kindness shines through both tragedy and triumph, whose working-class roots inform his values, and whose candor and approachability enable him to connect with citizens of all kinds.

This book traces Biden's vice presidency in unprecedented detail, shedding light on who he is as a political leader and patriot, and also as a father, husband, and friend. It will delight and fascinate readers who yearn for the return of honesty and ethics to the nation's highest offices.

As we turn the page towards a brighter future, this portrait of one of the most influential names in American politics is a timeless reminder of the values this country holds truest, and of how a leader like Joe Biden can unite a nation.

David Lienemann is an editorial and lifestyle photographer based in New Mexico. As the former White House photographer for Vice President Joe Biden, he spent 8 years documenting visits to 47 states and 64 countries, making nearly a million photographs of moments both grand and intimate. Before coming to the White House, Lienemann covered the 2008 presidential campaign for clients including the New York Times, Chicago Tribune, Associated Press, and Getty Images. He graduated from Cornell College with a BA in Economics and Business in 2005.

A generous photo tribute to the former vice president and current Democratic candidate for president...The vast majority of the photos are skillful, and some of the shots are especially memorable: Biden with SEAL trainees, interacting with troops in Baghdad, signing a soldier’s flag, golfing with Obama at Joint Base Andrews, visiting Dachau with a Holocaust survivor, mourning the death of his son Beau, and speaking with the staff of Orlando’s Pulse nightclub after the 2016 mass shooting...As America faces the Trump-Biden election in November, Lienemann leaves us wondering—as we enjoy his terrific photos—what might have happened if Biden was the Democratic candidate in 2016.—Kirkus Reviews

This feature require that you enable JavaScript in your browser.
END_OF_DOCUMENT_TOKEN_TO_BE_REPLACED

END_OF_DOCUMENT_TOKEN_TO_BE_REPLACED

This feature require that you enable JavaScript in your browser.
END_OF_DOCUMENT_TOKEN_TO_BE_REPLACED