The Vampire Chronicles Collection: Interview with the Vampire, The Vampire Lestat, The Queen of the Damned (Paperback) 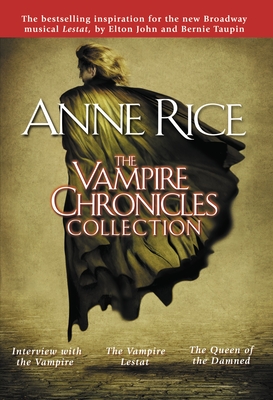 The hypnotic, deeply seductive novels of Anne Rice have captivated millions of fans around the world. It all began a quarter of a century ago with Interview with the Vampire. Now, in one chilling volume, here are the first three classic novels of The Vampire Chronicles.

INTERVIEW WITH THE VAMPIRE
Witness the confessions of a vampire. A novel of mesmerizing beauty and astonishing force, it is a story of danger and flight, love and loss, suspense and resolution, and the extraordinary power of the senses.

“A magnificent, compulsively readable thriller . . . Anne Rice begins where Bram Stoker and the Hollywood versions leave off and penetrates directly to the true fascination of the myth–the education of the vampire.”
–Chicago Tribune

THE VAMPIRE LESTAT
Once an aristocrat from pre-revolutionary France, now a rock star in the decadent 1980s, Lestat rushes through the centuries seeking to fathom the mystery of his existence. His is a mesmerizing story–passionate and thrilling.

“Frightening, sensual . . . A psychological, mythological sojourn . . . Anne Rice will live on through the ages of literature. . . . To read her is to become giddy as if spinning through the mind of time.”
–San Francisco Chronicle

“With The Queen of the Damned, Anne Rice has created universes within universes, traveling back in time as far as ancient, pre-pyramidic Egypt and journeying from the frozen mountain peaks of Nepal to the crowded, sweating streets of southern Florida.”
–Los Angeles Times

Anne Rice is the author of thirty-seven books, including the Vampire Chronicles, the Lives of the Mayfair Witches, and the Wolf Gift book series. Rice was born in New Orleans in 1941 and grew up there and in Texas. She lived in San Francisco with her husband, the poet and painter, Stan Rice until 1988, when they returned to New Orleans to live with their son, Christopher. In 2006, Rice moved to Rancho Mirage, California. She died in 2021.

This feature require that you enable JavaScript in your browser.
END_OF_DOCUMENT_TOKEN_TO_BE_REPLACED

END_OF_DOCUMENT_TOKEN_TO_BE_REPLACED

This feature require that you enable JavaScript in your browser.
END_OF_DOCUMENT_TOKEN_TO_BE_REPLACED