Enchantment: A Classic Fantasy with a Modern Twist (Paperback) 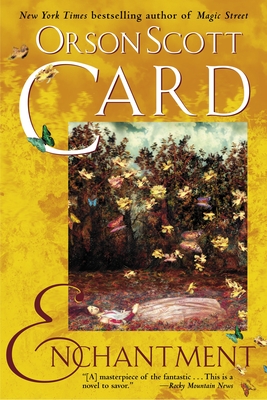 In Enchantment, Orson Scott Card works his magic as never before, transforming the timeless story of Sleeping Beauty into an original fantasy brimming with romance and adventure.

The moment Ivan stumbled upon a clearing in the dense Carpathian forest, his life was forever changed. Atop a pedestal encircled by fallen leaves, the beautiful princess Katerina lay still as death. But beneath the foliage a malevolent presence stirred and sent the ten-year-old Ivan scrambling for the safety of Cousin Marek's farm.

Now, years later, Ivan is an American graduate student, engaged to be married. Yet he cannot forget that long-ago day in the forest—or convince himself it was merely a frightened boy’s fantasy. Compelled to return to his native land, Ivan finds the clearing just as he left it.

This time he does not run. This time he awakens the beauty with a kiss . . . and steps into a world that vanished a thousand years ago.

A rich tapestry of clashing worlds and cultures, Enchantment is a powerfully original novel of a love and destiny that transcend centuries . . . and the dark force that stalks them across the ages.

Orson Scott Card is the first writer to be awarded both the Hugo and the Nebula for science fiction novels in two consecutive years. He is thus far the recipient of four Hugo Awards, two Nebula Awards, one World Fantasy Award, and four Locus Awards, among others. Also, a dozen of his plays have been produced in regional theater, his novel Saints has been an underground hit for several years, and he has written hundreds of audio plays and a dozen scripts for animated video plays for the family market. He is the author of two books on writing: Character and Viewpoint and How to Write Science Fiction and Fantasy. Card has conducted writing courses at several universities and a number of renowned workshops. In addition, Card is a partner in Fresco Pictures, a movie production company. He lives in Greensboro, North Carolina, with his family.

"Mixing magic and modernity, the acclaimed Orson Scott Card has woven threads of history, religion, and myth together into a convincing, time-hopping tale that is part love story, part adventure."
--Amazon.com

This feature require that you enable JavaScript in your browser.
END_OF_DOCUMENT_TOKEN_TO_BE_REPLACED

END_OF_DOCUMENT_TOKEN_TO_BE_REPLACED

This feature require that you enable JavaScript in your browser.
END_OF_DOCUMENT_TOKEN_TO_BE_REPLACED