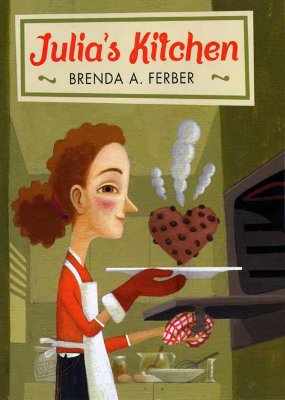 Cara Segal is a born worrier. She figures her worrying works like a whisper in God's ear if Cara's concerned about car crashes, kidnappings, or murders, she lets God know, and he always
spares her. But Cara never thought to worry about a fire. And one night while she's sleeping at a friend's house, her house catches fire, and her mother and younger sister are both killed.
Throughout shiva, the initial Jewish mourning period, Cara can't help wondering about God's role in the tragedy. And what is her father's role in her life now? He walks around like a ghost
and refuses to talk about the fire. Cara longs for her family and her home, where sweet smells filled the house as Cara's mom filled orders for her catering business, Julia's Kitchen. Then one
day a call comes in for a cookie order, and Cara gets a wild idea. Maybe by bringing back Julia's Kitchen, she can find a way to reconnect with everything she's lost.

Complete with a glossary of Hebrew and Yiddish terms and a recipe for chocolate chip cookies, this debut novel is a joyous tribute to the resiliency of the human spirit.

Award for "Julia's Kitchen." She lives in Deerfield, Illinois.

"The emotions are real, the protagonist empathetic, and the resolution believable. Poignant." --Starred, Kirkus Reviews
"Deftly told."  --Chicago Tribune "Touching and authentic . . .major themes about grief and healing are beautifully addressed in what turns out to be a powerful debut novel."  --Booklist "The novel's brevity and honesty will appeal to both Jewish and non-Jewish girls."  --School Library Journal "Readers will appreciate the book's poignant and sympathetic depiction of bereavement and its hopeful message of a legacy that can transcend separation."  --The Bulletin of the Center for Children's Books "Real, raw emotion emanates from this affecting debut novel.  [A] heartrending tale of loss and healing."  --Publishers Weekly

This feature require that you enable JavaScript in your browser.
END_OF_DOCUMENT_TOKEN_TO_BE_REPLACED

END_OF_DOCUMENT_TOKEN_TO_BE_REPLACED

This feature require that you enable JavaScript in your browser.
END_OF_DOCUMENT_TOKEN_TO_BE_REPLACED