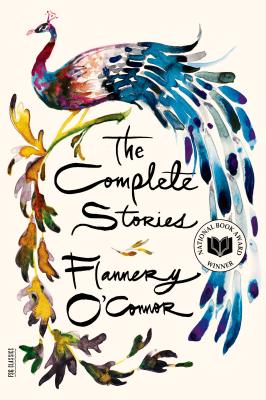 Winner of the National Book Award

There are thirty-one stories here in all, including twelve that do not appear in the only two story collections O'Connor put together in her short lifetime--Everything That Rises Must Converge and A Good Man Is Hard to Find.

O'Connor published her first story, "The Geranium," in 1946, while she was working on her master's degree at the University of Iowa. Arranged chronologically, this collection shows that her last story, "Judgement Day"--sent to her publisher shortly before her death—is a brilliantly rewritten and transfigured version of "The Geranium." Taken together, these stories reveal a lively, penetrating talent that has given us some of the most powerful and disturbing fiction of the twentieth century. Also included is an introduction by O'Connor's longtime editor and friend, Robert Giroux.

Flannery O'Connor was born in Savannah, Georgia, in 1925. When she died at the age of thirty-nine, America lost one of its most gifted writers at the height of her powers. O’Connor wrote two novels, Wise Blood (1952) and The Violent Bear It Away (1960), and two story collections, A Good Man Is Hard to Find (1955) and Everything That Rises Must Converge (1964). Her Complete Stories, published posthumously in 1972, won the National Book Award that year, and in a 2009 online poll it was voted as the best book to have won the award in the contest’s 60-year history. Her essays were published in Mystery and Manners (1969) and her letters in The Habit of Being (1979). In 1988 the Library of America published her Collected Works; she was the first postwar writer to be so honored. O’Connor was educated at the Georgia State College for Women, studied writing at the Iowa Writers’ Workshop, and wrote much of Wise Blood at the Yaddo artists’ colony in upstate New York. She lived most of her adult life on her family’s ancestral farm, Andalusia, outside Milledgeville, Georgia.

Robert Giroux is the editor of two collections of Elizabeth Bishop's writing, both published by Farrar, Straus and Giroux: The Collected Prose and One Art: Letters.

“What we lost when she died is bitter. What we have is astonishing: the stories burn brighter than ever, and strike deeper.” —Walter Clemons, Newsweek

This feature require that you enable JavaScript in your browser.
END_OF_DOCUMENT_TOKEN_TO_BE_REPLACED

END_OF_DOCUMENT_TOKEN_TO_BE_REPLACED

This feature require that you enable JavaScript in your browser.
END_OF_DOCUMENT_TOKEN_TO_BE_REPLACED