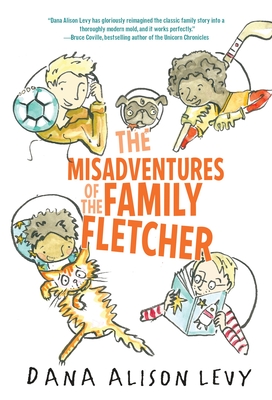 This is book number 1 in the Family Fletcher Series series.

The start of the school year is not going as the Fletcher brothers hoped. Each boy finds his plans for success veering off in unexpected and sometimes diastrous directions. And at home, their miserable new neighbor complains about everything. As the year continues, the boys learn the hard and often hilarious lesson that sometimes what you least expect is what you come to care about the most.

Praise for The Misadventures of the Family Fletcher

[set star] ”Their banter is realistic, and the disorder of their everyday lives, convincing. The Fletcher family rules!” —Kirkus Reviews, Starred

”Dana Alison Levy has gloriously reimagined the classic family story into a thoroughly modern mold, and it works perfectly.” —Bruce Coville, bestselling author of My Teacher Is an Alien and the Unicorn Chronicles
[P1]
[set star] ”With its semi-episodic structure, laugh-out-loud humor, and mix of zaniness and love, Levy’s debut offers something truly significant: a middle-grade family story featuring gay parents and interracial families that is never about either issue.” —School Library Journal, Starred

”Levy provides a compelling, compassionate, and frequently hilarious look at their daily concerns. By book’s end readers will want to be part of (or at least friends with) this delightful family.” —The Horn Book

Dana Alison Levy was raised by pirates but escaped at a young age and went on to earn a degree in aeronautics and puppetry. Actually, that's not true--she just likes to make things up. That's why she always wanted to write books. She was born and raised in New England and studied English literature before going to graduate school for business. While there is value in all learning, had she known she would end up writing for a living, she might not have struggled through all those statistics and finance classes. Dana was last seen romping around with her family in Massachusetts.

This feature require that you enable JavaScript in your browser.
END_OF_DOCUMENT_TOKEN_TO_BE_REPLACED

END_OF_DOCUMENT_TOKEN_TO_BE_REPLACED

This feature require that you enable JavaScript in your browser.
END_OF_DOCUMENT_TOKEN_TO_BE_REPLACED