The God Equation: The Quest for a Theory of Everything (Hardcover) 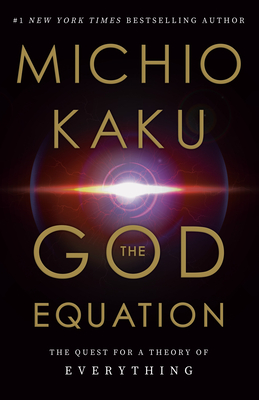 
When Newton discovered the law of gravity, he unified the rules governing the heavens and the Earth. Since then, physicists have been placing new forces into ever-grander theories.

But perhaps the ultimate challenge is achieving a monumental synthesis of the two remaining theories—relativity and the quantum theory. This would be the crowning achievement of science, a profound merging of all the forces of nature into one beautiful, magnificent equation to unlock the deepest mysteries in science: What happened before the Big Bang? What lies on the other side of a black hole? Are there other universes and dimensions? Is time travel possible? Why are we here?

Kaku also explains the intense controversy swirling around this theory, with Nobel laureates taking opposite sides on this vital question. It is a captivating, gripping story; what’s at stake is nothing less than our conception of the universe.

Written with Kaku’s trademark enthusiasm and clarity, this epic and engaging journey is the story of The God Equation.

MICHIO KAKU is a professor of theoretical physics at the City University of New York, co-founder of string field theory, and the author of several widely acclaimed science books, including Beyond Einstein, The Future of Humanity, The Future of the Mind, Hyperspace, Physics of the Future, and Physics of the Impossible. He is the science correspondent for CBS This Morning, the host of the radio programs Science Fantastic and Exploration, and a host of several science TV specials for the BBC and the Discovery and Science Channels.

“This is an excellent book written by a masterful science communicator. . . . If there is anyone who can demystify the esoteric mathematics and physics of string theory, it is [Kaku]. And in this wonderful little book, that is precisely what he does—explain in clear and simple terms the conceptual breakthroughs, the blind alleys and the unanswered questions—in the search for a grand unified theory of everything. . . . The God Equation dazzles. . . . Kaku, a consummate storyteller, provides an engaging, unvarnished account. . . . His book presents cutting-edge ideas in theoretical physics, and primes readers to be ready when the next major breakthrough occurs.” —The Wall Street Journal

“Kaku eloquently reviews the structure of our universe, highlighting contributions from intellectual giants and those continuing the daunting, decades-long quest for the elusive theory of everything. . . . Examining this tantalizing theory, Kaku outlines its promises, problems, and the breathtaking, almost inconceivable array of possibilities it presents. Kaku's latest captures the awesome and mysterious beauty of the universe, of our planet, and of ourselves, and will intrigue anyone who ponders existence.” —Booklist

“An expert account of the search for 'the holy grail of physics.' . . . Illuminating. . . . An important work.” —Kirkus Reviews

This feature require that you enable JavaScript in your browser.
END_OF_DOCUMENT_TOKEN_TO_BE_REPLACED

END_OF_DOCUMENT_TOKEN_TO_BE_REPLACED

This feature require that you enable JavaScript in your browser.
END_OF_DOCUMENT_TOKEN_TO_BE_REPLACED