So Much Things to Say: The Oral History of Bob Marley (Paperback) 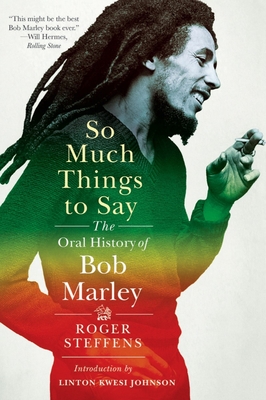 Renowned reggae historian Roger Steffens’s riveting oral history of Bob Marley’s life draws on four decades of intimate interviews with band members, family, lovers, and confidants—many speaking publicly for the first time. Hailed by the New York Times Book Review as a “crucial voice” in the documentation of Marley’s legacy, Steffens spent years traveling with the Wailers and taking iconic photographs. Through eyewitness accounts of vivid scenes—the future star auditioning for Coxson Dodd; the violent confrontation between the Wailers and producer Lee Perry; the attempted assassination (and conspiracy theories that followed); the artist’s tragic death from cancer—So Much Things to Say tells Marley’s story like never before. What emerges is a legendary figure “who feels a bit more human” (The New Yorker).

Roger Steffens is the world’s leading reggae historian, and former co-host of the award-winning radio program Reggae Beat. His programs on Marley’s life have been presented at the Smithsonian and the Library of Congress, among other venues. He lives in Los Angeles, California.

Definitive...a landmark....This might be the best Bob Marley book ever.
— Will Hermes - Rolling Stone

Steffens identifies many more pieces of [Marley] than have ever before been put together in one book.
— Colin Grant - Guardian

A complete portrait.… Calls on many voices to recall the one iconic voice.
— Los Angeles Times

[So Much Things to Say] narrates the life of Marley from cradle to grave.… Steffens has been on the Marley case for decades, and he’s a crucial voice in this epic chorus.… Illuminating.

If Bob Marley is Jesus in these times, Roger Steffens is Peter.
— Carlos Santana

So Much Things to Say is Steffens’s must-read/can’t-stop-reading account of Bob Marley’s historic career and his indelible achievements.

An invaluable insight into the life and times of one of the great pop culture figures of the twentieth century.… Endlessly fascinating.
— Robert Hilburn, author of Johnny Cash: The Life

All true gospels are shaped by the accounts of eyewitnesses who walked with the one we speak of. Roger Steffens has collected these accounts and has given us a book of truths complicated by the bending of memory, motive and mystery. The effect is a fresh and renewed affirmation of Marley’s genius, humanity and mystique. This book is a triumph of the storytelling virtuosity of Jamaican people, and a testament to the care and glorious obsessions of Roger Steffens.
— Kwame Dawes, author of City of Bones: A Testament and Bob Marley: Lyrical Genius

By far the most important and definitive book written about Bob Marley.
— Bruno Blum, musician, music historian, writer, artist and lecturer based in Paris

This feature require that you enable JavaScript in your browser.
END_OF_DOCUMENT_TOKEN_TO_BE_REPLACED

END_OF_DOCUMENT_TOKEN_TO_BE_REPLACED

This feature require that you enable JavaScript in your browser.
END_OF_DOCUMENT_TOKEN_TO_BE_REPLACED