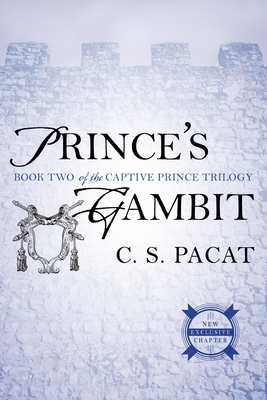 This is book number 2 in the The Captive Prince Trilogy series.

With their countries on the brink of war, Damen and his new master, Prince Laurent, must exchange the intrigues of the palace for the sweeping might of the battlefield as they travel to the border to avert a lethal plot.

Forced to hide his identity, Damen finds himself increasingly drawn to the dangerous, charismatic Laurent. But as the fledgling trust between the two men deepens, the truth of secrets from both their pasts is poised to deal them the crowning death blow...

C. S. Pacat is the author of the Captive Prince trilogy. Born in Australia and educated at the University of Melbourne, she has since lived in a number of different cities, including Tokyo and Perugia. She currently resides and works in Melbourne.

Praise for C. S. Pacat and the Captive Prince Trilogy

“You will be completely enthralled and on edge.”—USA Today

“Have you read Captive Prince? If you haven’t, what are you waiting for?”—HeroesandHeartbreakers.com

“The cumulative effect of reading them back to back is mind blowing.”—Dear Author

“Fans of Pacat’s internet-serial sensation will need no convincing of the merits of this series, but new readers should take note—this book lives up to every word of praise it has garnered. The lush setting, full of intricate historical detail, engaging decadence and ruthless scheming, will draw many, but it’s Pacat’s characters...who’ll surely keep readers captive. Their tenuous, fractious relationship is the heart and soul of this trilogy, and thankfully, readers will not have long to wait between installments in order to watch it unfold.”—RT Book Reviews

This feature require that you enable JavaScript in your browser.
END_OF_DOCUMENT_TOKEN_TO_BE_REPLACED

END_OF_DOCUMENT_TOKEN_TO_BE_REPLACED

This feature require that you enable JavaScript in your browser.
END_OF_DOCUMENT_TOKEN_TO_BE_REPLACED