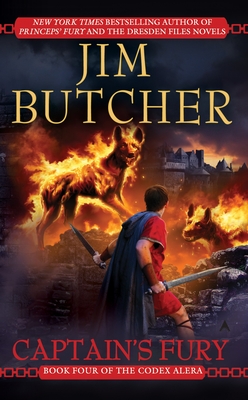 This is book number 4 in the Codex Alera series.

After two years of bitter conflict with the hordes of invading Canim warriors, Tavi of Calderon, now Captain of the First Aleran Legion, realizes that a peril far greater than the Canim exists—the mysterious threat that drove the savage Canim to flee their homeland.

Tavi proposes attempting an alliance with the Canim against their common foe, but his warnings go unheeded. For the Senate’s newly-appointed military commander has long desired to wipe out the Canim “scourge,” and their slave allies.

Now, Tavi must find a way to overcome centuries-old animosities if an alliance is to be forged, and he must lead his legion in defiance of the law, against friend and foe—or none will have a chance of survival...

A martial arts enthusiast whose résumé includes a long list of skills rendered obsolete at least two hundred years ago, #1 New York Times bestselling author Jim Butcher turned to writing as a career because anything else probably would have driven him insane. He lives mostly inside his own head so that he can write down the conversation of his imaginary friends, but his head can generally be found in Independence, Missouri. Jim is the author of the Dresden Files, the Codex Alera novels, and the Cinder Spires series, which began with The Aeronaut’s Windlass.

“The fourth Codex Alera novel further develops the world and characters of its predecessors and confirms Butcher's mastery of action-filled fiction.”—Booklist

“Readers are transported to a distant world that feels like a cross between Ancient Rome and Ancient Britain in this complex tale of war and personal growth...Mr. Butcher demonstrates his versatile talent that never fails to engage his audience.”—Huntress Reviews

This feature require that you enable JavaScript in your browser.
END_OF_DOCUMENT_TOKEN_TO_BE_REPLACED

END_OF_DOCUMENT_TOKEN_TO_BE_REPLACED

This feature require that you enable JavaScript in your browser.
END_OF_DOCUMENT_TOKEN_TO_BE_REPLACED