Girl With a Pearl Earring (Paperback) 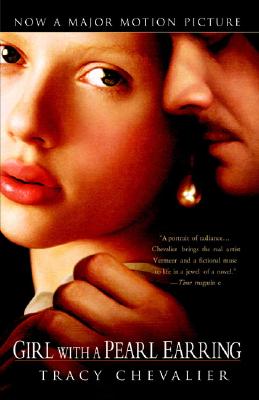 By Tracy Chevalier
$15.00
Email or call for price.

In seventeenth-century Delft, there's a strict social order—rich and poor, Catholic and Protestant, master and servant—and all know their place. When Griet becomes a maid in the household of the painter Johannes Vermeer, she thinks she knows her role: housework, laundry, and the care of his six children. She even feels able to handle his shrewd mother-in-law; his restless, sensual wife; and their jealous servant. What no one expects is that Griet's quiet manner, quick perceptions, and fascination with her master's paintings will draw her inexorably into his world. Their growing intimacy sparks whispers; and when Vermeer paints her wearing his wife's pearl earrings, the gossip escalates into a full-blown scandal that irrevocably changes Griet's life.

Written with the precision and focus of an Old Master painting, Girl With a Pearl Earring is a vivid portrait of colorful seventeenth-century Delft, as well as the hauntingly poignant story of one young girl's rite of passage.

"I was born and grew up in Washington, DC. After getting a BA in English from Oberlin College (Ohio), I moved to London, England in 1984. I intended to stay 6 months; I'm still here. "As a kid I'd often said I wanted to be a writer because I loved books and wanted to be associated with them. I wrote the odd story in high school, but it was only in my twenties that I started writing 'real' stories, at night and on weekends. Sometimes I wrote a story in a couple evenings; other times it took me a whole year to complete one. "Once I took a night class in creative writing, and a story I'd written for it was published in a London-based magazine called Fiction. I was thrilled, even though the magazine folded 4 months later. I worked as a reference book editor for several years until 1993 when I left my job and did a year-long MA in creative writing at the University of East Anglia in Norwich (England). My tutors were the English novelists Malcolm Bradbury and Rose Tremain. For the first time in my life I was expected to write every day, and I found I liked it. I also finally had an idea I considered 'big' enough to fill a novel. I began The Virgin Blue during that year, and continued it once the course was over, juggling writing with freelance editing. "An agent is essential to getting published. I found my agent Jonny Geller through dumb luck and good timing. A friend from the MA course had just signed on with him and I sent my manuscript of The Virgin Blue mentioning my friend's name. Jonny was just starting as an agent and needed me as much as I needed him. Since then he's become a highly respected agent in the UK and I've gone along for the ride."

"A portrait of radiance...Chevalier brings the real artist Vermeer and a fictional muse to life in a jewel of a novel." —Time magazine

"A vibrant, sumptuous novel...triumphant...a beautifully written tale that mirrors the elegance of the painting that inspired it." —The Wall Street Journal

"The richest, most rewarding novel I have read this year." —The Cleveland Plain Dealer

"Tracy Chevalier has so vividly imagined the life of the painter and his subject that you say to yourself: This is the way it must have been." —The Milwaukee Journal Sentinel

"A jewel of a novel." —The Miami Herald

This feature require that you enable JavaScript in your browser.
END_OF_DOCUMENT_TOKEN_TO_BE_REPLACED

END_OF_DOCUMENT_TOKEN_TO_BE_REPLACED

This feature require that you enable JavaScript in your browser.
END_OF_DOCUMENT_TOKEN_TO_BE_REPLACED