City on the Verge: Atlanta and the Fight for America's Urban Future (Hardcover) 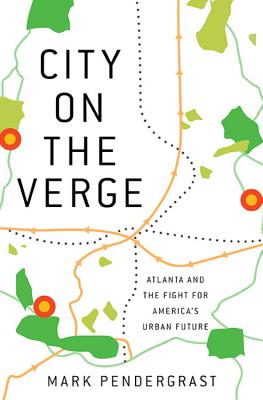 By Mark Pendergrast
Email or call for price

Atlanta is on the verge of tremendous rebirth-or inexorable decline. A kind of Petri dish for cities struggling to reinvent themselves, Atlanta has the highest income inequality in the country, gridlocked highways, suburban sprawl, and a history of racial injustice. Yet it is also an energetic, brash young city that prides itself on pragmatic solutions.

Today, the most promising catalyst for the city's rebirth is the BeltLine, which the New York Times described as "a staggeringly ambitious engine of urban revitalization." A long-term project that is cutting through forty-five neighborhoods ranging from affluent to impoverished, the BeltLine will complete a twenty-two-mile loop encircling downtown, transforming a massive ring of mostly defunct railways into a series of stunning parks connected by trails and streetcars.

An inspiring narrative of ordinary Americans taking charge of their local communities, City of the Verge provides a model for how cities across the country can reinvent themselves.

Mark Pendergrast is an independent scholar who brews a fantastic cup of coffee. He is the author of many books, including For God, Country and Coca-Cola. He lives in Vermont.

"City on the Verge is a deeply researched effort to capture [the city's] history and, along the way, paint a portrait of Atlanta's neighborhoods, from the still elite area where the author spent his childhood to bustling zones of gentrification and immovable pockets of desperation."
—Douglas Blackmon, Wall Street Journal

"A lively urban history, charting Atlanta's growth and linking it to political developments over time... [Pendergrast] is generally optimistic, even in a time when taxpayers are reluctant to shoulder the burden of improving the commonweal: 'Change is in the air in Atlanta,' he writes, 'mostly for the good.'... A welcome look at a city-a mass of cities-not often heard from in the urban-studies literature and of wide interest well beyond the I-95 corridor."

"Pendergrast, an Atlanta native, devotes this detailed study to how the city [Atlanta] might be revived and reimagined for the 21st century. Mixing planning, history, and personal anecdotes, he describes an urban renewal project's path from grassroots idea to $4 billion project.... Pendergrast has an obvious love for both the city and the energy behind the BeltLine project."

"An enchanting story of a Sunbelt city that will captivate both urban planners and the general public. An Atlanta native, the author brings an engaging and insightful voice to this work, and his research is meticulously thorough."
—Library Journal

"Offering both an account of Atlanta's tumultuous history and an anatomical breakdown of the BeltLine project so far, Pendergrast situates City on the Verge within the larger context of urban America's future. A must-read for urban-planning junkies, it should also appeal to those interested in community building and the oft-charged politics of the built environment."
—Seven Days

"City on the Verge is a must read for city-builders, urbanists, and anyone who cares about our future. Sunbelt cities like Atlanta are booming, attracting people from across the country and remaking themselves from sprawling suburban areas to more dynamic urban centers. With a journalist's eye for detail and a writerly knack for great story-telling, Mark Pendergrast takes us inside the forces and actors that are transforming Atlanta and the urban world we live in."
—Richard Florida, author of The Rise of the Creative Class and of The New Urban Crisis

"Atlanta colleagues used to joke that Atlanta was the "Public Health Capital of the US" because it had CDC, the Carter Center, and good hospitals. "No," I would argue, "There aren't enough sidewalks, scarcely anywhere to walk, and parks are too few and poorly accessible. The place seems built only for car drivers and country club members. In Mark Pendergrast's excellent book, we see how Atlanta is going from a fat city to a healthy one with the help of the BeltLine and good leadership."
—Dr. Richard Jackson, former Director, CDC National Center for Environmental Health, and author of Designing Healthy Communities

This feature require that you enable JavaScript in your browser.
END_OF_DOCUMENT_TOKEN_TO_BE_REPLACED

END_OF_DOCUMENT_TOKEN_TO_BE_REPLACED

This feature require that you enable JavaScript in your browser.
END_OF_DOCUMENT_TOKEN_TO_BE_REPLACED