Tales Of The Lavender Menace: A Memoir Of Liberation (Paperback) 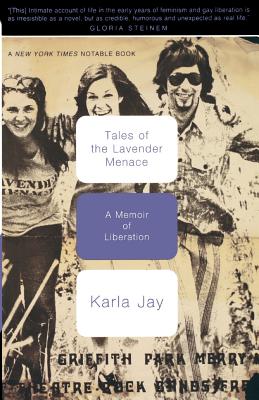 Karla Jay's memoir of an age whose tumultuous social and political movements fundamentally reshaped American culture takes readers from her early days in the 1968 Columbia University student riots to her post-college involvement in New York radical women's groups and the New York Gay Liberation Front to Southern California in the early '70s, where she continued in the battle for gay civil rights. We see here helping to organize the takeover of The Ladies Home Journal and "ogle-ins" -- where women staked out Wall Street and whistled at the men. We follow her in the fast lane of the sexual freedom movement as she liberates sun worshippers from their bathing suits.

Karla Jay is Professor of English and Director of Women's Studies at Pace Unviersity. She has authored and edited eight books, including the pioneering Out of the Closets (with Allen Young), and has written for many publications, including the New York Times Book Review, Ms. magazine, New York Newsday, and the Village Voice.

This feature require that you enable JavaScript in your browser.
END_OF_DOCUMENT_TOKEN_TO_BE_REPLACED

END_OF_DOCUMENT_TOKEN_TO_BE_REPLACED

This feature require that you enable JavaScript in your browser.
END_OF_DOCUMENT_TOKEN_TO_BE_REPLACED