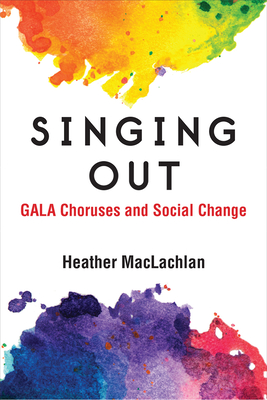 By Heather MacLachlan
Email or call for price

Can you change the world through song? This appealing idea has long been the professed aim of singers who are part of choruses affiliated with the Gay and Lesbian Association of Choruses (GALA). Theses choruses first emerged in the 1970s, and grew out of a very American tradition of (often gender-segregated) choral singing that explicitly presents itself as a community-based activity. By taking a close look at these choruses and their mission, Heather MacLachlan unpacks the fascinating historical and cultural dynamics behind groups that seek to change society for the better by encouraging acceptance of LGBT-identified people and promoting diversity more generally. She characterizes their mission as “integrationist rather than liberationist” and zeroes in on the inherent tension between GALA’s progressive social goals and the fact that the music most often performed by GALA groups is deeply rooted in a fairly narrowly conceived tradition of art music that identifies as white, Euro-centric, and middle class--and that much of the membership identifies as white and middle class as well.

Pundits often wax eloquent about the power of music, asserting that it can, in some positive way, change the world. Such statements often rest on an unexamined claim that music can and does foster social justice. Singing Out: GALA Choruses and Social Change tackles the premise underlying such claims, analyzing groups of amateur singers who are explicitly committed to an agenda of social justice.

Heather MacLachlan is Associate Professor of Ethnomusicology at University of Dayton.

This feature require that you enable JavaScript in your browser.
END_OF_DOCUMENT_TOKEN_TO_BE_REPLACED

END_OF_DOCUMENT_TOKEN_TO_BE_REPLACED

This feature require that you enable JavaScript in your browser.
END_OF_DOCUMENT_TOKEN_TO_BE_REPLACED