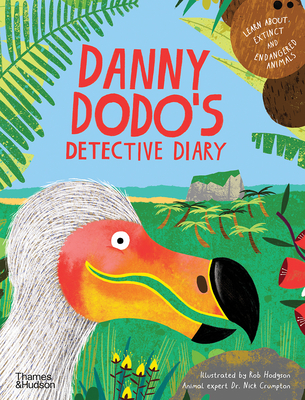 Danny Dodo uncovers the mystery behind the disappearances of iconic endangered and extinct species.

Danny Dodo is a detective on a mission. Over the years, thousands of amazing animals have disappeared. Where did they go? What happened to them? And why did they vanish? It’s Danny’s job to find out—and he needs readers to help him!

Danny Dodo’s Detective Diary includes stories about missing animals like Skye the passenger pigeon, whose flock was so big it could block out the sun; Lily the tree snail, muse of Hawaii whose shimmering shell inspired poetry; and Mayleen the Baiji river dolphin, known to many as the “Goddess of the Yangtze.” But Danny doesn’t only want to celebrate his extinct buddies, he’s going to help everyone get to know some of his endangered friends too—and he’s counting on his readers to keep a helpful eye on them.

Featuring the charming illustrations of Rob Hodgson, Danny Dodo’s Detective Diary stands apart with its colorful creatures and humorous approach to zoology based on the latest scientific research, and it includes handy tips for young children on what they can do to help the planet.

Dr. Nick Crumpton is a zoologist at University College London. He completed his PhD at Cambridge University before working at the Natural History Museum and for the BBC as a journalist and researcher. He is the author of the Favorite Pets series and The Amazing Animal Atlas.

This feature require that you enable JavaScript in your browser.
END_OF_DOCUMENT_TOKEN_TO_BE_REPLACED

END_OF_DOCUMENT_TOKEN_TO_BE_REPLACED

This feature require that you enable JavaScript in your browser.
END_OF_DOCUMENT_TOKEN_TO_BE_REPLACED