The Immortal Irishman: The Irish Revolutionary Who Became an American Hero (Hardcover) 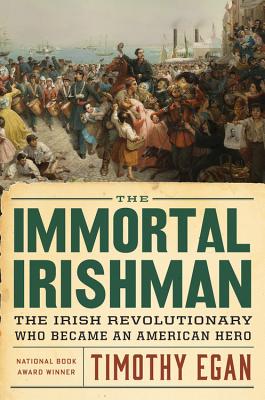 From the National Book Award–winning and best-selling author Timothy Egan comes the epic story of one of the most fascinating and colorful Irishman in nineteenth-century America.

The Irish-American story, with all its twists and triumphs, is told through the improbable life of one man. A dashing young orator during the Great Famine of the 1840s, in which a million of his Irish countrymen died, Thomas Francis Meagher led a failed uprising against British rule, for which he was banished to a Tasmanian prison colony. He escaped and six months later was heralded in the streets of New York — the revolutionary hero, back from the dead, at the dawn of the great Irish immigration to America.  Meagher’s rebirth in America included his leading the newly formed Irish Brigade from New York in many of the fiercest battles of the Civil War — Bull Run, Antietam, Fredericksburg. Twice shot from his horse while leading charges, left for dead in the Virginia mud, Meagher’s dream was that Irish-American troops, seasoned by war, would return to Ireland and liberate their homeland from British rule.   The hero's last chapter, as territorial governor of Montana, was a romantic quest for a true home in the far frontier. His death has long been a mystery to which Egan brings haunting, colorful new evidence.

TIMOTHY EGAN is a Pulitzer Prize–winning reporter and the author of eight other books, most recently The Immortal Irishman, a New York Times bestseller. His book on the Dust Bowl, The Worst Hard Time, won a National Book Award for nonfiction. His account of photographer Edward Curtis, Short Nights of the Shadow Catcher, won the Carnegie Medal for nonfiction. He writes a biweekly opinion column for the New York Times.

“Without a shadow of doubt this is one of the finest Irish-American books ever written….What Egan has done is restore the reputation and uncovered a host of details on a man I would venture to say had no peer in our history of Irish America….Egan’s take on Irish-American history gives this book a breadth and significance that would be very hard to match.” —Niall O’Dowd, Irish America

"This is marvelous stuff. Thomas F. Meagher strides onto Egan's beautifully wrought pages just as he lived—powerfully larger than life. A fascinating account of an extraordinary life." —Daniel James Brown, author of The Boys in the Boat, Nine Americans and Their Epic Quest for Gold at the 1936 Olympics

"Meagher lived life full-tilt, with old-fashioned honor as well as courage and dash, so inspiring Egan that the prose flashes and flares . . . " —Booklist, starred review

"Just in time for St. Paddy's Day comes this sensational bio."—AARP The Magazine

“Thomas Meagher’s is an irresistible story, irresistibly retold by the virtuosic Timothy Egan . . . The author tells Meagher’s exhilarating story with an Irishman’s flair for the tragic, poetic and dramatic . . . A gripping, novelistic page-turner…. Imperfect but irresistible, Meagher has long deserved a revival and reappraisal. For sure, he has a rousing one now.” -- The Wall Street Journal

"Exhilarating . . . a rollicking, historical adventure story . . . You may not have heard the name Meagher, but after reading Egan’s excellent biography, you’ll never forget it." -- San Antonio Express News

"An old-fashioned tale of tall talk, high ideals, and irresistible appeal . . .You will not read a historical thriller like this all year… [Egan] is a master storyteller.” -- The Boston Globe

"Egan has a gift for sweeping narrative . . . and he has a journalist’s eye for the telltale detail . . . This is masterly work.” -- The New York Times Book Review

This feature require that you enable JavaScript in your browser.
END_OF_DOCUMENT_TOKEN_TO_BE_REPLACED

END_OF_DOCUMENT_TOKEN_TO_BE_REPLACED

This feature require that you enable JavaScript in your browser.
END_OF_DOCUMENT_TOKEN_TO_BE_REPLACED