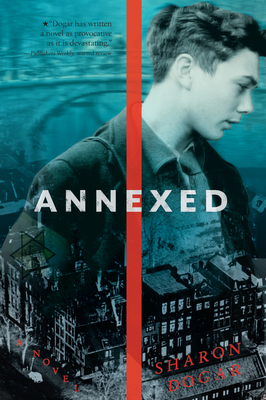 “Everyone knows the story of Anne Frank. This book re-imagines that story as experienced by Peter, the teenage boy who lived in the Annex with the Frank family. Peter's voice is haunting and heartbreaking. His pleas for people to remember, to believe, will stay with you long after the book has ended.”
— Kyla Paterno, Garfield Book Company at PLU, Tacoma, WA

Everyone knows about Anne Frank and her life hidden in the secret annex – but what about the boy who was also trapped there with her?

In this powerful and gripping novel, Sharon Dogar explores what this might have been like from Peter’s point of view. What was it like to be forced into hiding with Anne Frank, first to hate her and then to find yourself falling in love with her? Especially with your parents and her parents all watching almost everything you do together. To know you’re being written about in Anne’s diary, day after day? What’s it like to start questioning your religion, wondering why simply being Jewish inspires such hatred and persecution? Or to just sit and wait and watch while others die, and wish you were fighting.

As Peter and Anne become closer and closer in their confined quarters, how can they make sense of what they see happening around them?

Anne’s diary ends on August 4, 1944, but Peter’s story takes us on, beyond their betrayal and into the Nazi death camps. He details with accuracy, clarity and compassion the reality of day to day survival in Auschwitz – and ultimately the horrific fates of the Annex’s occupants.

Sharon Dogar is a children’s psychotherapist who lives in Oxford, England with her family.

"While Annexed does not depend upon a prior reading of The Diary of a Young Girl for interest or understanding, readers of that book will appreciate the opportunity to see Anne Frank's story given a benefit it could not have: hindsight."—The Horn Book, starred review

"Readers are enlightened and deeply moved....Annexed is a superb addition to the Holocaust literature, and should not be missed."—School Library Journal, starred review

"Showing equal skill in bringing history to life and in capturing the spirit of a young man searching for his identity amid chaos, Dogar has written a novel as provocative as it is devastating."—Publishers Weekly, starred review

"The lines between written record, educated guess, and fictional construct are fascinatingly blurred here. . .made all the more so when readers consider the role perspective, translation, and editing play in the written record. The book’s skillful synthesis of all these facets should stimulate discussion about the nature of history, fiction, and truth."—The Bulletin, starred review

"[Annexed] is compassionate and thoughtful, told in a very intimate way. Dogar gets the claustrophobia of the annexe across brilliantly, as it escapes in pointless bickering and petty resentments, but the picture of vital, interesting people with hopes, dreams, loves and ambitions rises equally vividly from the pages. Peter himself is wonderfully drawn: painfully shy, introspective and independent of thought."—The Book Bag (UK) —

This feature require that you enable JavaScript in your browser.
END_OF_DOCUMENT_TOKEN_TO_BE_REPLACED

END_OF_DOCUMENT_TOKEN_TO_BE_REPLACED

This feature require that you enable JavaScript in your browser.
END_OF_DOCUMENT_TOKEN_TO_BE_REPLACED