Future Sounds: The Story of Electronic Music from Stockhausen to Skrillex (Hardcover) 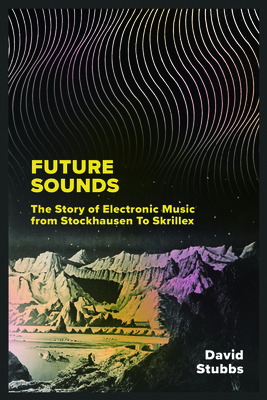 The definitive guide to electronic music.
"Stubbs is a joy to read."--MOJO***
In FUTURE SOUNDS, David Stubbs charts the evolution of electronic music from the earliest mechanical experiments in the late nineteenth century to the pre-World War I inventions of the Futurist Luigi Russolo, author of the "Art Of Noises" manifesto. He takes us through the musique concr te of radical composers such as Edgard Var se, Pierre Schaeffer, and Karlheinz Stockhausen, to the gradual absorption of electronic instrumentation into the mainstream: be it through the BBC Radiophonic Workshop and the work of pioneers like Delia Derbyshire, grandiose prog rock, or the more DIY approach of electronica, house, and techno. It's a tale of mavericks and future dreamers overcoming Luddite resistance, malfunctioning devices, and sonic mayhem. Its beginnings are in the world of avant-classical composition, but the book also encompasses the cosmic funk of Stevie Wonder, Giorgio Moroder, and unforgettable 80s electronic pop from the likes of Depeche Mode, Pet Shop Boys, and Laurie Anderson - right up to present day innovators on the underground scene. But above all, it's an essential story of authenticity: is this music? Is it legitimate? What drew its creators to make it? Where does it stand, in relation to rock and pop, classical and jazz music, to the modern society that generated it? And why does it resonate more strongly than ever in our own postmodern, seemingly post-futurist times? FUTURE SOUNDS is the definitive account that answers these questions.

David Stubbs is a British author and music journalist. Alongside Simon Reynolds, he was one of the co-founders of the Oxford magazine Monitor before going on to join the staff at Melody Maker. He later worked for NME, Uncut, and Vox, as well as The Wire. His work has appeared in The Times, The Sunday Times, Spin, Guardian, The Quietus, and GQ . He has written a number of books, including a song by song profile of Jimi Hendrix and Fear Of Music: Why People Get Rothko But Don't Get Stockhausen, a comparative study of 20th century avant garde music and art. He currently lives in London.

This feature require that you enable JavaScript in your browser.
END_OF_DOCUMENT_TOKEN_TO_BE_REPLACED

END_OF_DOCUMENT_TOKEN_TO_BE_REPLACED

This feature require that you enable JavaScript in your browser.
END_OF_DOCUMENT_TOKEN_TO_BE_REPLACED