Sweet Dreams: The Story of the New Romantics (Hardcover) 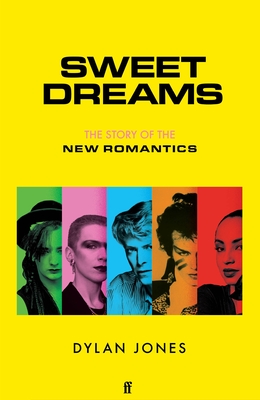 The definitive oral history of the New Romantics. Sweet Dreams charts the British cultural explosion that happened in the ten years from 1975-1985 -- the rise of the New Romantics. Growing out of the remnants of the post-punk period, the New Romantics introduced club culture, ska, electronica, and goth to the world.
One of the most creative entrepreneurial periods since the Sixties, the era had a huge influence on the growth of broadcast media. Not only did it visually define the decade, it was the catalyst for the Second British Invasion, when the US charts would be colonized by British pop music, making it one of the most powerful cultural exports since the Beatles.
For fans of Jon Savage's 1966 and Lizzie Goodman's Meet Me in the Bathroom-- SWEET DREAMS is the fascinating story of how The New Romantic movement was born in the British clubs of the late 1970s and flourished on the radio and television airwaves of the early 1980s.
Sweet Dreams were made of this.

Dylan Jones studied at Chelsea School of Art and St. Martin's School of Art. A former editor at i-D, The Face, Arena, the Observer and the Sunday Times, he is currently the Editor-In-Chief of GQ. He has won the British Society of Magazine Editors "Editor of the Year" award a record eleven times, and in 2013 was the recipient of the Mark Boxer Award. Under his editorship the magazine has won over 50 awards. He is the author of the Sunday Times best-seller David Bowie: A Life, and the New York Times best seller Jim Morrison: Dark Star. A trustee of the Hay Festival, in 2013 he was awarded an OBE for services to publishing.

This feature require that you enable JavaScript in your browser.
END_OF_DOCUMENT_TOKEN_TO_BE_REPLACED

END_OF_DOCUMENT_TOKEN_TO_BE_REPLACED

This feature require that you enable JavaScript in your browser.
END_OF_DOCUMENT_TOKEN_TO_BE_REPLACED