Idaho's Chinook Salmon: The Journey of a LIFE Cycle (Paperback) 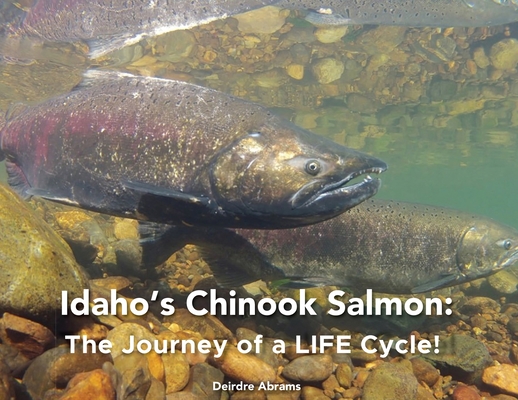 Wild Chinook salmon, some migrating more than 900 miles to the ocean from the high mountains of Idaho, once made up nearly 50% of the Columbia River Basin's salmon runs. In 2020, and over the last twenty years, wild Chinook in Idaho have been in crisis, placed on the endangered species list, and face the growing threat of extinction. In fact, only 2 % of Idaho's wild Chinook population remains. This is not only a crisis for this Idaho salmon but also for biodiversity in the Pacific Northwest. Snake River Chinook salmon are culturally important to many indigenous peoples and are the main source of food for the Southern Resident killer whales (orcas) of Puget Sound; therefore, the plight of Chinook salmon is adversely affecting native traditions and sustenance, and also the Southern Resident orcas, which are also on the endangered species list. Because Chinook salmon who originate in Idaho travel the farthest to the Pacific Ocean... and back... coupled with the most elevation change... than any other Chinook population in the world, the focus of this book is on them and their miraculous, obstacle-filled migration. It is for the fish and young people that I write this book- in hopes of enlightening and inspiring kids all over the country, not just in Idaho, to learn how very special these brave salmon are and to join me in protecting them

This feature require that you enable JavaScript in your browser.
END_OF_DOCUMENT_TOKEN_TO_BE_REPLACED

END_OF_DOCUMENT_TOKEN_TO_BE_REPLACED

This feature require that you enable JavaScript in your browser.
END_OF_DOCUMENT_TOKEN_TO_BE_REPLACED