My Darling Angel: A Complete Collection of a Soldier's Letters Home During WWII (Hardcover) 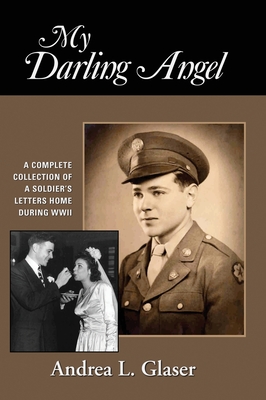 Lewis and Muriel Glaser met in Jackson Heights, New York, when he was sixteen and she was fourteen. They fell in love and remained dedicated to each other forever after. Lew was in college when WWII began and when Pearl Harbor was attacked. Soon after, he left college and attended radio school for a year, in preparation for joining the Army Signal Corps. In 1943, Lew, not yet twenty years old, registered for the army and left his life in New York and his one and only love, Muriel. The military took him all over the country and eventually the world, where he fought in the European Theater Operations and served in the occupying force in Japan after the war. Lew never wanted to leave Muriel, but he was proud to serve his country. To keep their love burning and to keep himself sane during his army years from 1943 to 1946, Lew wrote to Muriel almost daily (" Your letters] lift me right out of my room and carry me to your side, living your life with you - for a few moments anyway."), and Muriel kept these handwritten letters her whole life. The letters paint the picture of a courageous, intelligent, and humor-loving soldier and give us insight into the life and times, the war, and military life from the standpoint of a soldier whose love always burned strongly for his "Darling Angel."

This feature require that you enable JavaScript in your browser.
END_OF_DOCUMENT_TOKEN_TO_BE_REPLACED

END_OF_DOCUMENT_TOKEN_TO_BE_REPLACED

This feature require that you enable JavaScript in your browser.
END_OF_DOCUMENT_TOKEN_TO_BE_REPLACED