A Daughter of the Samurai: A Memoir (Modern Library Torchbearers) (Paperback) 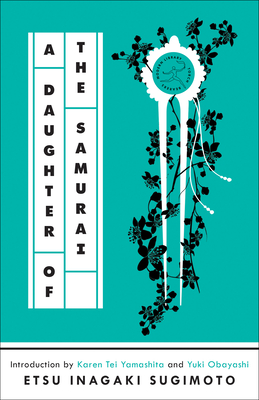 A young Japanese woman leaves the only home she’s ever known for married life in nineteenth-century Ohio in this delightful, charming memoir, a tribute to the struggles of the first generation of Japanese immigrants—with an introduction by Karen Tei Yamashita and Yuki Obayashi

The youngest daughter of a high-ranking samurai in late-nineteenth-century Japan, Etsu Inagaki Sugimoto is originally destined to be a Buddhist priestess. She grows up a curly haired tomboy in snowy Echigo, certain of her future role in her community. But as a young teenager, she is instead engaged to a Japanese merchant in Ohio—and Etsu realizes she will eventually have to leave the only world she has ever known for the United States.

Etsu arrives in Cincinnati as a bright-eyed and observant twenty-four-year-old, puzzled by the differences between the two cultures and alive to the contradictions, ironies, and beauties of both. Her memoir, reprinted for the first time in decades, is an unforgettable story of a strong and determined woman.

The Modern Library Torchbearers series features women who wrote on their own terms, with boldness, creativity, and a spirit of resistance.

Etsu Inagaki Sugimoto (1872-1950) was born in Nagaoka, the daughter of a high-ranking advisor to a powerful territorial lord, a few years after the Meiji Restoration ended Japan's feudal system. Her father died when she was twelve; soon afterward, she became engaged to his friend Matsunosuke Sugimoto, a merchant living in the United States whom she had never met. Etsu arrived in Cincinnati, Ohio, in 1898, and lived in College Hill. Later she lived in New York City, where she turned to literature and taught Japanese language, culture, and history at Columbia University.

This feature require that you enable JavaScript in your browser.
END_OF_DOCUMENT_TOKEN_TO_BE_REPLACED

END_OF_DOCUMENT_TOKEN_TO_BE_REPLACED

This feature require that you enable JavaScript in your browser.
END_OF_DOCUMENT_TOKEN_TO_BE_REPLACED