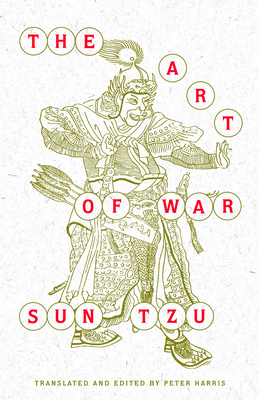 A new translation of the ancient Chinese military classic that is widely admired by military and business strategists—with an introduction that provides sweeping historical context, and notes featuring contemporary commentary on Sun Tzu's wisdom over the centuries.

For more than two thousand years, The Art of War has provided leaders with essential tactical and management advice. An elemental part of Chinese culture, it has also become a touchstone in the West for achieving success, whether on the battlefield or in business.

This Vintage Classics edition features a brilliant translation by Peter Harris, first published by Everyman's Library in 2018. Alongside the pithy and powerful ancient text, Harris includes:
• Notes
• A bibliography
• A chronology of Chinese dynasties
• A map
• Extracts from the canon of classical Chinese commentators
• An illuminating introduction on the warrior-philosopher Sun Tzu and the role of The Art of War in history and today

SUN TZU was a Chinese general, military strategist, and philosopher who lived in China in the 6th century BC. Sun Tzu is traditionally credited as the author of The Art of War, a widely influential work of military strategy that has affected both Western and Eastern philosophy. Sun Tzu is revered in China as a legendary historical figure. His birth name was Sun Wu; the name Sun Tzu by which he is best known is an honorific that means "Master Sun."

PETER HARRIS is a specialist in the political and cultural history of China. He is the founding Director of the Asian Studies Institute at Victoria University, Wellington, New Zealand, and a Visiting Professor at Nanjing University, China. He has written, edited and translated numerous books on China and Asia. Other volumes he edited for Everyman's Library include The Travels of Marco Polo, Zen Poems, and Three Hundred Tang Poems.

“Like Thucydides, [Sun Tzu] has a reputation today at least as great as it was well over two millennia ago . . . Given the peculiarly personal acumen and insight that inform Sun Tzu’s brief, sometimes enigmatic, but always practical Art of War . . . we are surely reading the words of an acutely intelligent military man with a subtle, original mind and a wealth of experience all his own.”
—from the Introduction by Peter Harris

This feature require that you enable JavaScript in your browser.
END_OF_DOCUMENT_TOKEN_TO_BE_REPLACED

END_OF_DOCUMENT_TOKEN_TO_BE_REPLACED

This feature require that you enable JavaScript in your browser.
END_OF_DOCUMENT_TOKEN_TO_BE_REPLACED