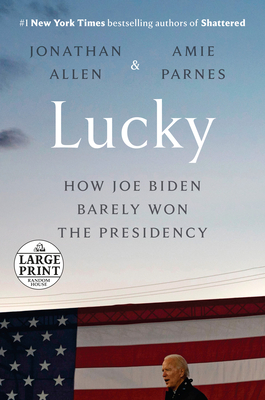 The inside story of the historic 2020 presidential election and Joe Biden’s harrowing ride to victory, from the #1 New York Times bestselling authors of Shattered, the definitive account of Hillary Clinton’s 2016 campaign.

Almost no one thought Joe Biden could make it back to the White House—not Donald Trump, not the two dozen Democratic rivals who sought to take down a weak front-runner, not the mega-donors and key endorsers who feared he could not beat Bernie Sanders, not even Barack Obama. The story of Biden’s cathartic victory in the 2020 election is the story of a Democratic Party at odds with itself, torn between the single-minded goal of removing Donald Trump and the push for a bold progressive agenda that threatened to alienate as many voters as it drew.

In Lucky, #1 New York Times bestselling authors Jonathan Allen and Amie Parnes use their unparalleled access to key players inside the Democratic and Republican campaigns to unfold how Biden’s nail-biting run for the presidency vexed his own party as much as it did Trump. Having premised his path on unlocking the Black vote in South Carolina, Biden nearly imploded before he got there after a relentless string of misfires left him freefalling in polls and nearly broke.

Allen and Parnes brilliantly detail the remarkable string of chance events that saved him, from the botched Iowa caucus tally that concealed his terrible result, to the pandemic lockdown that kept him off the stump, where he was often at his worst. More powerfully, Lucky unfolds the pitched struggle within Biden’s general election campaign to downplay the very issues that many Democrats believed would drive voters to the polls, especially in the wake of Trump’s response to nationwide protests following the murder of George Floyd. Even Biden’s victory did not salve his party’s wounds; instead, it revealed a surprising, complicated portrait of American voters and crushed Democrats’ belief in the inevitability of a blue wave.

A thrilling masterpiece of political reporting, Lucky is essential reading for understanding the most important election in American history and the future that will come of it.

Jonathan Allen is a senior political analyst with NBC News digital. A winner of the Dirksen and Hume awards for reporting, he was previously the White House bureau chief for Politico and the Washington bureau chief for Bloomberg News.

Amie Parnes is a senior correspondent for The Hill newspaper in Washington, where she covers the Biden White House and national politics. She was previously a staff writer at Politico, where she covered the Senate, the 2008 presidential campaign, and the Obama White House.

“[B]lunt, insidery talk is the lifeblood of Lucky, . . . a brisk and detailed account of the 2020 presidential race [with] memorable and telling insider moments.”—The Washington Post

“We are blessed once again in the modern era with great writing duos and our viewers are looking at one of them. This is the book. . . . You think you know the story until you read this.”—Brian Williams, MSBNC

“Lucky is nothing if not clear-eyed. . . . [The authors’] take on Biden is a prism and scorecard that gives added understanding to the seemingly never-ending war of 2020. It makes the silent parts of the conversation audible and reminds the reader the past is always with us.”—The Guardian

“Lucky is more than a journalistic ‘first draft of history.’ It is likely to endure as the definitive account of the Biden campaign. In addition to their fine craftsmanship and exquisite attention to detail, the authors keep their eye on the big picture of the 2020 elections. Biden was lucky in the primaries as the last person standing in a splintered field of candidates. He was lucky in the November election because of Trump’s botched response to the COVID-19 pandemic, the central challenge of his presidency. Failed presidents don’t get reelected. As demonstrated by my Keys to the White House prediction system that called Biden’s win in early August 2020, it is governing that counts for the party holding the White House.”—Alan Lichtman, author of The Case for Impeachment

This feature require that you enable JavaScript in your browser.
END_OF_DOCUMENT_TOKEN_TO_BE_REPLACED

END_OF_DOCUMENT_TOKEN_TO_BE_REPLACED

This feature require that you enable JavaScript in your browser.
END_OF_DOCUMENT_TOKEN_TO_BE_REPLACED