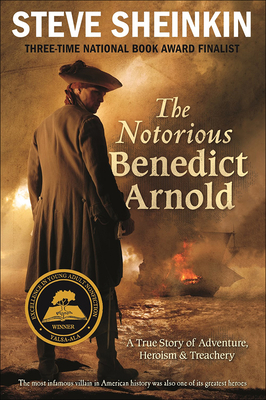 New York Times bestselling author, Newbery Honor recipient, and National Book Award finalist Steve Sheinkin presents both the heroism and the treachery of one of the Revolutionary War's most infamous players in his biography of Benedict Arnold.

Winner of the Boston Globe-Horn Book Award for Nonfiction
Winner of the YALSA-ALA Award for Excellence in Young Adult Nonfiction Most people know that Benedict Arnold was America's first, most notorious traitor. Few know that he was also one of its greatest Revolutionary War heroes. Steve Sheinkin's accessible biography, The Notorious Benedict Arnold, introduces young readers to the real Arnold: reckless, heroic, and driven. Packed with first-person accounts, astonishing American Revolution battle scenes, and surprising twists, this is a gripping and true adventure tale from history. "Sheinkin sees Arnold as America's 'original action hero' and succeeds in writing a brilliant, fast-paced biography that reads like an adventure novel...The author's obvious mastery of his material, lively prose and abundant use of eyewitness accounts make this one of the most exciting biographies young readers will find." --Kirkus Reviews (starred review) "Several complex political, social, and military themes emerge, one of the most prominent being that within the Continental army, often simplistically depicted as single-minded patriots, beat hearts scheming with political machinations that are completely familiar today...Arnold's inexorable clash with Gates and his decision to turn traitor both chill and compel." --Horn Book Magazine (starred review) Also by Steve Sheinkin: Bomb: The Race to Build--and Steal--the World's Most Dangerous Weapon
The Port Chicago 50: Disaster, Mutiny, and the Fight for Civil Rights
Undefeated: Jim Thorpe and the Carlisle Indian School Football Team
Most Dangerous: Daniel Ellsberg and the Secret History of the Vietnam War
Which Way to the Wild West?: Everything Your Schoolbooks Didn't Tell You About Westward Expansion
King George: What Was His Problem?: Everything Your Schoolbooks Didn't Tell You About the American Revolution
Two Miserable Presidents: Everything Your Schoolbooks Didn't Tell You About the Civil War
Born to Fly: The First Women's Air Race Across America

This feature require that you enable JavaScript in your browser.
END_OF_DOCUMENT_TOKEN_TO_BE_REPLACED

END_OF_DOCUMENT_TOKEN_TO_BE_REPLACED

This feature require that you enable JavaScript in your browser.
END_OF_DOCUMENT_TOKEN_TO_BE_REPLACED