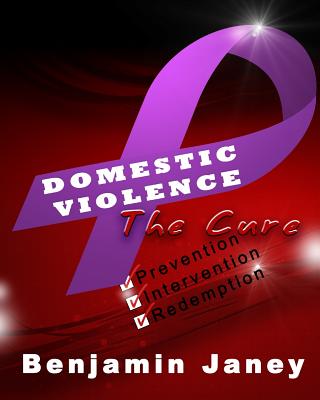 By Benjamin Janey
$15.00
Not in-stock currently- expect arrival in 1-14 business days
(This book cannot be returned.)

Domestic violence has been increasing, regardless of nationwide polls and pacifying statistics. Some may not report the abuse, and a disproportionate number of victims are depending upon a "Restraining Order" to elucidate such an undetected form of mental illness. In this Workbook, you and I will take on this mental illness like never before. Contrary to the traditional analysis and conception that incline to see it as just a problem, there's more. I've been in domestic violence programs that are effective only on paper and while in class. Consequently, intervention can no longer be the brightest idea when there's an imperative prognosis. We'd like to believe that by discussing what has occurred will change things. Until now, here's a mental illness that must be dealt with by going to the root.

Benjamin Janey, the author of the urban novel entitled Up The Way, was born and raised in Bridgeton, New Jersey and now resides in the state of Connecticut. Many people may know him as Bro. Benjamin throughout the internet because of the powerful quotes and words of inspiration he's shared over the past 3 years. Oft times, you could befriend him and he wouldn't even mention that he's an author. He is a self-taught author who's defied all odds. With humble beginnings, BEN wrote Op-Ed's and have appeared in The Hartford Courant, The Register Citizen, and The Litchfield Inquirer, just to name a few. As time progressed, Benjamin worked full time as a newspaper reporter for The Hartford Inquirer Newspaper Group. Shortly after he was awarded his own column called Generation X, Keeping It Real. Like any major city, Hartford streets began to run rampant in the mid 90's and a greater need for his services had risen. He was hired as a Violence Reduction Mediator by the University of Connecticut, The School of Social Work, to assist with conflict resolution and to create effective new programs to curb Gang and Domestic Violence. Over a three year period, once the situation calmed, just like any other program that works, the federal funding was pulled immediately. He's had my brushes with the law, but looks back and then ahead. If it were not for what he's experienced in life, Benjamin wouldn't be here today giving you the heart and soul of what you're anticipating. The real deal... Helping others is his motivation because he always says, "Everyone has a gift, and it just took me a little longer to unwrap mine!" Letting his past be of no regret, Ben is stepping out of the box, refusing to be just an urban novel author. His sophomore book, Domestic Violence-The Cure(c) is something the entire country must anticipate. He's presenting Prevention, Intervention, and Redemption like never before...

This feature require that you enable JavaScript in your browser.
END_OF_DOCUMENT_TOKEN_TO_BE_REPLACED

END_OF_DOCUMENT_TOKEN_TO_BE_REPLACED

This feature require that you enable JavaScript in your browser.
END_OF_DOCUMENT_TOKEN_TO_BE_REPLACED