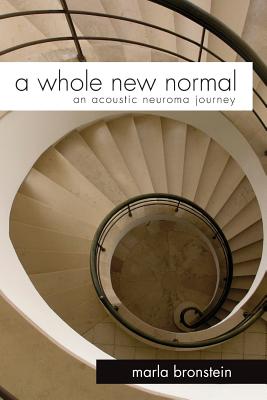 By Marla Bronstein
$14.95
Email or call for price.

When Marla Bronstein was first diagnosed with an Acoustic Neuroma, she, like many others, went straight to the internet. She found out what it was, treatment options, and read personal stories of resulting complications from long, frightening surgery. Marla wanted a map to help guide her through the months ahead of surgery that might show her a story with a happy ending. Marla wrote the book she wanted and needed so desperately to read. Marla's story is written with the hope that others might also find their path in dealing with any life-threatening and life-changing situation.

Marla Bronstein was born in Long Island, New York, and moved to the west coast as a child. She attended high school in southern California and went to college at UC Berkeley. She received a BA in Linguistics in 1979. Marla's favorite language was ASL, and for a short while entertained the thought of being a lawyer who specialized in serving the needs of the Deaf community. She became a paralegal and quickly discovered the life of a lawyer was not for her. 20 years later, Marla changed careers and finally dabbled in sign language interpreting, office administration, non-profit social service work, and finally, non-profit arts. For fun, she is involved in local community theater. She has acted, directed, stage managed, costumed, painted sets for and written scripts for, and received acting and directing awards for numerous short and full length plays. All the while, she continued writing stories, letters, blogs, commentaries and on-line journals.

This feature require that you enable JavaScript in your browser.
END_OF_DOCUMENT_TOKEN_TO_BE_REPLACED

END_OF_DOCUMENT_TOKEN_TO_BE_REPLACED

This feature require that you enable JavaScript in your browser.
END_OF_DOCUMENT_TOKEN_TO_BE_REPLACED