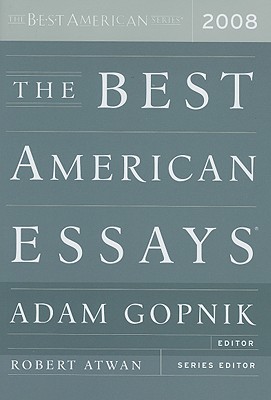 Here you will find the finest essays "judiciously selected from countless publications" (Chicago Tribune), ranging from The New Yorker and Harper's to Swink and Pinch. In his introduction to this year's edition, Adam Gopnik finds that great essays have "text and inner text, personal story and larger point, the thing you're supposed to be paying attention to and some other thing you're really interested in." David Sedaris's quirky, hilarious account of a childhood spent yearning for a home where history was properly respected is also a poignant rumination on surviving the passage of time. In "The Ecstasy of Influence," Jonathan Lethem ponders the intriguing phenomenon of cryptomnesia: a person believes herself to be creating something new but is really recalling similar, previously encountered work. Ariel Levy writes in "The Lesbian Bride's Handbook" of her efforts to plan a party that accurately reflects her lifestyle (which she notes is "not black-tie ") as she confronts head-on what it means to be married. And Lauren Slater is off to "Tripp Lake," recounting the one summer she spent at camp -- a summer of color wars, horseback riding, and the "wild sadness" that settled in her when she was away from home.
In the end, Gopnik believes that the only real ambition of an essayist is to be a master of our common life. This latest installment of The Best American Essays is full of writing that reveals, in Gopnik's words, "the breath of things as they are.