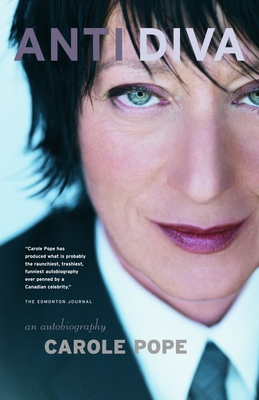 Throughout her career, Carole Pope has blazed a trail for the diva and anti-diva in all of us, and here she offers a no-holds-barred look at her adventures in the music scene – on the concert stage, in the recording studio, and in the bedroom. Known for ushering Canada from the punk movement of the 1970s to the new wave sound of the 1980s with Rough Trade, she candidly shares her thoughts on AIDS, sexuality and sexual politics, and the new breed of music divas that dominates the charts today.

With three Juno Awards, a Genie Award, and four Gold and two Platinum records to her credit, Carole Pope is an icon of transgressive music. As the lead singer of the band Rough Trade, Pope and her songwriting partner Kevan Staples pioneered new wave music in Canada, and Pope became an artist of enduring mystique. Carol Pope now lives in West Hollywood, California, but travels back and forth to Canada.

"This book is about my experiences as a sexually confused teenager who became a disgruntled rock icon. It's a comment on the times, beginning in the summer of love. It drags me kicking and screaming into the 21st century." —Carole Pope

"I have to bear the flower-bedecked cross of the baby boomer. For me the sixties consisted of taking every drug possible, hallucinating Shiva and Vishnu cartoons on hardwood floors, and having really bad sex with everybody. I almost forgot, we actually thought you could deal with your emotions with the aid of psychedelics and, yes, we did try to perpetrate the myth of a Utopian Atlantis-like lotus land where we could live together in peace and harmony. Yeah, right. Put me in a room with those losers now and I would run screaming to the nearest exit." —From "The Sixties (What Were We Thinking?)," Chapter One of Anti Diva

“Anti Diva is stacked with hundreds of similar caustic toss offs, thrown about with the kind of casual abandon you’d expect from a self-confessed and inveterate name-dropper…It’s the kind of book you take in a single gulp, for fear of losing step with its breathless, pulp-noir pace…” —Greg Quill, Toronto Star, 19 Nov 2000

“Pope’s humour and sexual bravado have translated well onto paper. Anti Diva is a subtle but scathing attack of those who have drifted into complacency both on a cultural and personal level. It is both a challenge and an invitation, especially to women and cultural producers, to keep kicking at the pedestals.” —Donna Lypchuck, National Post

“Anti Diva [is] a partly affectionate but mostly scathing look at herself and at the decade that brought her fame.” —Heather Malick, Globe and Mail

“Anti Diva is deeply enjoyable, nasty without apology, and unexpectedly deft…Pope is saucy and willing to say just about anything… ‘Unrepentant’ is the word that best applies…Refreshingly, Pope does not feel the need to apologize in any way for this behaviour, or to seek forgiveness. There is no closure, no reckoning, no teary epiphanies on mountaintops or Costa Rican yoga retreats.” —Elizabeth Renzetti, Globe and Mail

“14 years after the official retirement of Rough Trade, Carole Pope has produced what is probably the raunchiest, trashiest, funniest autobiography ever penned by a Canadian celebrity.” —Paul Gessell, The Edmonton Journal/The Vancouver Sun/Ottawa Citizen/ The Telegram (St. John’s)

“Pope…made sexual politics the grist of 80’s rochers Rough Trade a decade before k.d. lang started cross-dressing..[she] distinguishes herself by her frankness…Pope’s confessions are those of an unreconstructed celebrity.” —Elm Street

“[Anti Diva is] a titillating walk on the wild side.” —Maclean’s

“It’s the personality behind the words that makes Anti Diva an enticing read.” —Chart magazine (Toronto)

“A provocative and enjoyably trashy autobiography.” —The Edmonton Journal

“Those hungry for bits and pieces of dirt won’t be disappointed. Pope is a world-class namedropper (and I mean that in the best sense of the word).” —Montreal Mirror

“Carole Pope manages to dish the celebrity dirt in an attractive manner by not taking herself—or anyone else—too seriously.” —The Vancouver Sun

This feature require that you enable JavaScript in your browser.
END_OF_DOCUMENT_TOKEN_TO_BE_REPLACED

END_OF_DOCUMENT_TOKEN_TO_BE_REPLACED

This feature require that you enable JavaScript in your browser.
END_OF_DOCUMENT_TOKEN_TO_BE_REPLACED