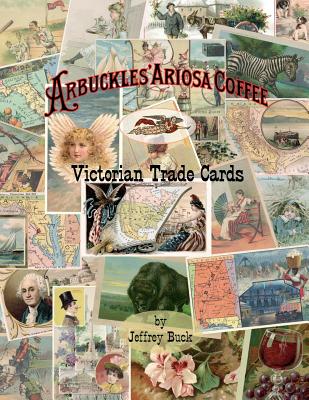 By Jeffrey Buck
$39.95
Not in-stock currently- expect arrival in 1-14 business days
(This book cannot be returned.)

This book is a comprehensive, illustrated reference for the chromolithographic advertising cards issued by the Arbuckle Brothers Coffee Company in the late 19th Century. Such cards were printed and distributed by a multitude of businesses during this period, and are commonly referred to as "Victorian Trade Cards".

To promote their "ARIOSA" brand of coffee, Arbuckles' distributed hundreds of different cards, most of them inserted into their 1-lb. coffee packages, and many of them in distinct and numbered series.

Some cards simply consisted of pretty pictures on the front, with Ariosa coffee advertising on the back. Many others purported to be educational in nature, weaving topics such as history, geography, zoology, and even cooking into both the illustrations and the accompanying narratives.

This reference includes full-color images of each and every card that was issued as part of a series, as well as most of the known cards that were issued independently. Printing varieties that have been identified for some cards are detailed and, in most cases, also illustrated. For a few of the series, which did not use designs originally commissioned for Arbuckles', background information has been included which traces the original sources for those designs.

Hopefully, this reference will serve not only as a valuable resource for active collectors of these wonderful old pieces of Americana, but perhaps also as an inspiration for future collectors and historians to delve into the fascinating world of both the Arbuckle Brothers Coffee Company and Victorian Trade Cards in general.

This feature require that you enable JavaScript in your browser.
END_OF_DOCUMENT_TOKEN_TO_BE_REPLACED

END_OF_DOCUMENT_TOKEN_TO_BE_REPLACED

This feature require that you enable JavaScript in your browser.
END_OF_DOCUMENT_TOKEN_TO_BE_REPLACED