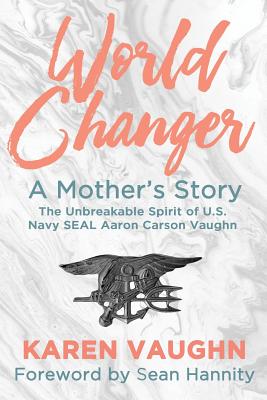 By Karen Vaughn
$18.95
Not in-stock currently- expect arrival in 1-14 business days
(This book cannot be returned.)

On August 6, 2011, 30 American soldiers aboard Extortion 17 perished in the single greatest loss of Navy SEAL lives. Among them - Aaron Carson Vaughn, a small-town boy who grew up in the hills of Tennessee and lived a life larger than most. Told through the eyes of Karen, Aaron's mother, this tender story of faith, family, and love grips the heart and shows how one family raised an American warrior filled with courage, tenacity, and patriotism. The Vaughn's story is not one about war or about a grieving family, but rather one of triumph and God's sustaining grace. Woven throughout Karen's story is practical advice for today's parents. Also included at the end is a study guide for those who desire to go deeper and learn how to raise children who live life so well that they leave a legacy.

Karen Vaughn is the mother of fallen US Navy SEAL, Aaron Carson Vaughn (SEAL Team VI). On August 6, 2011, Aaron was killed in action in the Tangi River Valley of Afghanistan when a chopper (call sign Extortion 17) carrying thirty Americans was shot from the sky while rushing into battle. The day Aaron's life ended Karen's began again.  Over the past five years, Karen has emerged on the national scene as a powerful spokeswoman for not only our defenders still fighting on foreign soil and securing peace across the globe, but also as an advocate for a better, stronger, more resilient America.  Carrying on Aaron's legacy has brought this Gold Star mother through the halls of Congress, into a National Press Conference, onto multiple national television sets and dozens of radio programs. She's been featured on large stages across this country as a keynote speaker, including a guest speaker position during the opening night of the 2016 Republican National Convention.  Karen has been married to Billy Vaughn for thirty-seven years and still believes their greatest accomplishment on earth was raising their three children: Aaron, Tara, and Ana.

This feature require that you enable JavaScript in your browser.
END_OF_DOCUMENT_TOKEN_TO_BE_REPLACED

END_OF_DOCUMENT_TOKEN_TO_BE_REPLACED

This feature require that you enable JavaScript in your browser.
END_OF_DOCUMENT_TOKEN_TO_BE_REPLACED