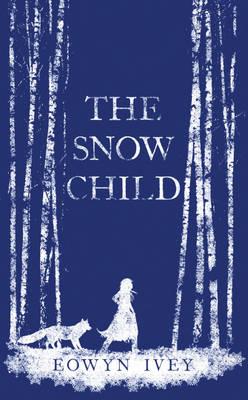 “This love story, set in Alaska, is really a love story about Alaska. Ivey describes the achingly beautiful landscape without making it seem an easy place to live. Based on an old fairy tale, this is the story of a childless couple who make a snow child one evening only to find a real little girl the next day. As the girl grows through the years, we know that this enchanting story will have the twists that we have come to expect with tales that teach us lessons about life. Friendships, marriage, parenthood, and survival -- all set in an unforgiving but entrancing landscape. I loved it!”
— Valerie Koehler, Blue Willow Bookshop, Houston, TX

Alaska, 1920: a brutal place to homestead, and especially tough for recent arrivals Jack and Mabel. Childless, they are drifting apart--he struggling to maintain the farm; she crumbling from loneliness and despair. In a moment of levity during the first snowfall, they build a child out of snow. The next morning the snow child is gone--but they glimpse a young girl running through the trees.
This little girl, who calls herself Faina, seems to be a child of the woods. She hunts with a red fox at her side and somehow survives alone in the Alaskan wilderness. As Jack and Mabel come to understand this child who could have stepped from the pages of a fairy tale, they begin to love her as their own daughter. But in this beautiful, violent territory things are rarely as they appear, and what they eventually learn about Faina will transform them all.

Eowyn LeMay Ivey was raised in Alaska and continues to live there with her husband and two daughters. She worked for nearly ten years as a reporter at the "Frontiersman" newspaper, where she won several awards. She is now a bookseller at an independent bookstore in Alaska.

This feature require that you enable JavaScript in your browser.
END_OF_DOCUMENT_TOKEN_TO_BE_REPLACED

END_OF_DOCUMENT_TOKEN_TO_BE_REPLACED

This feature require that you enable JavaScript in your browser.
END_OF_DOCUMENT_TOKEN_TO_BE_REPLACED