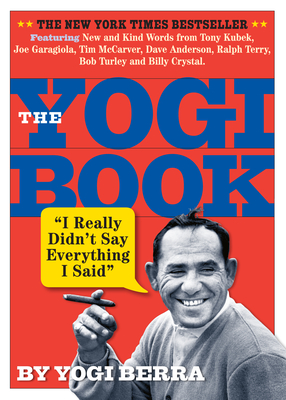 Celebrate one of the greatest and most beloved baseball players who ever lived—and certainly the most quoted. The Yogi Book is the New York Times bestseller filled with Yogi Berra’s immortal sayings, plus photographs, a career timeline, and appreciations by some of his greatest fans, including Billy Crystal and Tim McCarver.

Yogi Berra's gift for saying the smartest things in the funniest, most memorable ways has made him a legend. The Yogi Book brings all of his famous quotes together in one place—and even better, gives the story behind them. "It ain't over till it's over."—that’s Yogi's answer to a reporter when he was managing the Mets in July 1973, and they were nine games out of first place (not only quotable, but prophetic—they won the pennant). "Nobody goes there anymore. It's too crowded."—Yogi's comment to Stan Musial and Joe Garagiola about Ruggeri's restaurant in St. Louis in 1959. "It gets late early out there."—Yogi describing how shadows crept across Yankee Stadium's left field during late autumn afternoons.

YOGI BERRA was one of America's most beloved sports personalities. On the field, his exploits with the New York Yankees made him a vital part of the most successful sports franchise ever. Off the field, his wit and humor made him a unique and ubiquitous part of American culture.

This feature require that you enable JavaScript in your browser.
END_OF_DOCUMENT_TOKEN_TO_BE_REPLACED

END_OF_DOCUMENT_TOKEN_TO_BE_REPLACED

This feature require that you enable JavaScript in your browser.
END_OF_DOCUMENT_TOKEN_TO_BE_REPLACED