Brainstorms and Mindfarts: The Best and Brightest, Dumbest and Dimmest Inventions in American History (Hardcover) 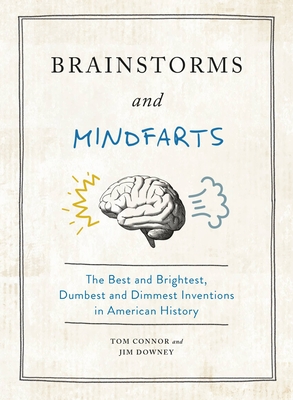 This informative and occasionally bizarre collection of American inventions will help you discover successful and significant ideas—along with the frivolous and utterly useless ones lost to history.

Innovation and entrepreneurism appear inextricably woven into the American DNA. Throughout American history, the great inventors and innovators gazed into the future and saw the products and services that would transform the world. While passionate about creating this new thing called a democracy, our Founding Fathers were also driven to change the way humans lived and worked—to complete everyday tasks faster, easier, and more efficiently.

As of 2018, the U.S. Patent & Trademark Office had granted its ten millionth patent. But with over 500,000 applications now being filed annually, fewer than half of these applicants will be granted patents and far fewer still—an estimated one percent—will realize commercial success, according to the Office. Some are flawed by mistakes or missing details, others too ridiculous to take seriously, still others simply ahead of their time.

From the brightest and most innovative to the wackiest, most bizarre, and downright crazy, this collection of 100 patents includes funny and informative descriptions and original illustrations, all the while letting you in on what most successful patents have in common, what inspired their creators, and how great inventors view the world.

Connor & Downey are the co-authors and co-producers of a dozen and a half books, as well as the authors of the national bestselling parodies IsMartha Stuart Living, Martha Stuart's Better Than You at Entertaining, and The Smyth 'n Hawk'em Gardening Catalog. Their projects range from humor and satire to pop culture, politics, design, and style.

This feature require that you enable JavaScript in your browser.
END_OF_DOCUMENT_TOKEN_TO_BE_REPLACED

END_OF_DOCUMENT_TOKEN_TO_BE_REPLACED

This feature require that you enable JavaScript in your browser.
END_OF_DOCUMENT_TOKEN_TO_BE_REPLACED