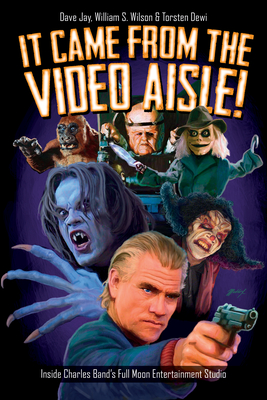 Charles Band's Full Moon Entertainment was the most remarkable B-movie studio of the 1990s, responsible for a barrage of sci-fi, fantasy, and horror classics during the last true golden age of the home video era. From Puppetmaster to Trancers and beyond, Full Moon transformed the VHS experience for fans worldwide, bringing the inner workings of the movie-making process into the living room, and in turn creating a ravenous fanbase that remains to this day. This book tracks the history of the company, from its late '80s birth among the ruins of the American drive-in through to its bid to survive in the modern digital world. Featuring rare artwork, behind-the-scenes photos, and over 60 exclusive interviews with the cast and crew who helped to create the legendary B-movie studio, this is an essential read for any cult film fan still lamenting the death of the mom 'n pop video store.

This feature require that you enable JavaScript in your browser.
END_OF_DOCUMENT_TOKEN_TO_BE_REPLACED

END_OF_DOCUMENT_TOKEN_TO_BE_REPLACED

This feature require that you enable JavaScript in your browser.
END_OF_DOCUMENT_TOKEN_TO_BE_REPLACED