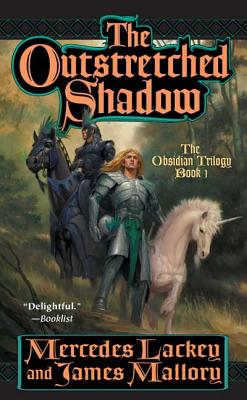 By Mercedes Lackey, James Mallory
$8.99
Email or call for price.

This is book number 1 in the The Obsidian Mountain Trilogy series.

The Outstretched Shadow, the first book in The Obsidian Trilogy from Mercedes Lackey and James Mallory

Kellen Tavadon, son of the Arch-Mage Lycaelon, thought he knew the way the world worked. His father, leading the wise and benevolent Council of Mages, protected and guided the citizens of the Golden City of the Bells. Young Mages in training--all men, for women were unfit to practice magic--memorized the intricate details of High Magic and aspired to seats on the council.

Then he found the forbidden Books of Wild Magic--or did they find him? Their Magic felt like a living thing, guided by the hearts and minds of those who practiced it and benefited from it.
Questioning everything he has known, Kellen discovers too many of the City's dark secrets. Banished, with the Outlaw Hunt on his heels, Kellen invokes Wild Magic--and finds himself running for his life with a unicorn at his side.

Rescued by a unicorn, healed by a female Wild Mage who knows more about Kellen than anyone outside the City should, meeting Elven royalty and Elven warriors, and plunged into a world full of magical beings--Kellen both revels in and fears his new freedom.

The one thing all the Mages of the City agreed on was that practicing Wild Magic corrupted a Mage. Turned him into a Demon. Would that be Kellen's fate?

Deep in Obsidian Mountain, the Demons are waiting. Since their defeat in the last great War, they've been biding their time, sowing the seeds of distrust and discontent between their human and Elven enemies. Very soon now, when the Demons rise to make war, there will be no alliance between High and Wild Magic to stand against them. And then all the world will belong to the Endarkened.

Mercedes Lackey is the author of the bestselling Valdemar series, the Obsidian Trilogy (The Outstretched Shadow, To Light a Candle, and When Darkness Falls), the Enduring Flame trilogy (The Phoenix Unchained, The Phoenix Engendered, and The Phoenix Transformed), and The Phoenix Tales of the Five Hundred Kingdoms. She has written many other books, including Trio of Sorcery, Phoenix and Ashes, Sacred Ground, The Firebird, The Fairy Godmother, and Alta. Lackey is the co-author, with Andre Norton, of the Halfblood Chronicles, including Elvenborn. Mercedes Lackey was born in Chicago and graduated from Purdue University. She has worked as an artist’s model, a computer programmer, and for American Airlines, and has written lyrics and recorded more than fifty songs. She lives in Oklahoma.

James Mallory is the author of the Merlin trilogy (Merlin: The Old Magic; Merlin: The King’s Wizard; Merlin: The End of Magic). He lives in upstate New York.

“Lackey has two great strengths as a writer: her ability to tell an exciting story and to create sympathetic characters who inspire effortless identification. Lackey is one of the best storytellers in the field.” —Locus

“Lackey shows a sure touch with the wonder and adventure that characterize the best fantasy writers.” —Romantic Times

“An accomplished retelling of the beginning of the Arthurian legend. A good choice for large fantasy collections.” —Library Journal on Mallory's Merlin: The Old Magic

This feature require that you enable JavaScript in your browser.
END_OF_DOCUMENT_TOKEN_TO_BE_REPLACED

END_OF_DOCUMENT_TOKEN_TO_BE_REPLACED

This feature require that you enable JavaScript in your browser.
END_OF_DOCUMENT_TOKEN_TO_BE_REPLACED