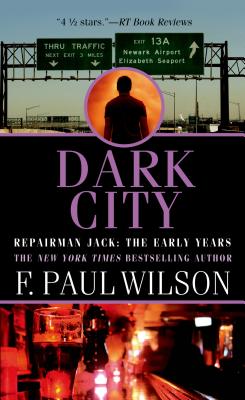 This is book number 17 in the Repairman Jack series.

Dark City is the second of a new prequel trilogy, Repairman Jack: The Early Years by F. Paul Wilson.

It's February 1992. Desert Storm is raging in Iraq but twenty-two-year-old Jack has more pressing matters at home. His favorite bar, The Spot, is about to be sold out from under Julio, Jack's friend. Jack has been something of a tag-along to this point, but now he takes the reins and demonstrates his innate talent for seeing biters get bit. With a body count even higher than in Cold City, this second novel of the Early Years Trilogy hurtles Jack into the final volume in which all scores will be settled, all debts paid.

F. Paul Wilson is the New York Times bestselling author of horror, adventure, medical thrillers, science fiction, and virtually everything in between. His books include the Repairman Jack novels—including Ground Zero, The Tomb, and Fatal Error—the Adversary cycle—including The Keep—and a young adult series featuring the teenage Jack. Wilson has won the Prometheus Award, the Bram Stoker Award, the Inkpot Award from the San Diego ComiCon, and the Lifetime Achievement Award of the Horror Writers of America, among other honors. He lives in Wall, New Jersey.

“Repairman Jack is one of my favorite characters--I'm full of happy anticipation every time I hold a new RJ novel in my hands.” —Charlaine Harris, author of the Sookie Stackhouse novels

“Sci-Fi, horror, crime: it's hard to define Wilson's tale since it cannily incorporates all genres and, as always, the pivotal point is the inimitable Repairman Jack, one of the most original characters ever introduced to readers.” —RT Times, ****1/2 , on The Dark At The End

This feature require that you enable JavaScript in your browser.
END_OF_DOCUMENT_TOKEN_TO_BE_REPLACED

END_OF_DOCUMENT_TOKEN_TO_BE_REPLACED

This feature require that you enable JavaScript in your browser.
END_OF_DOCUMENT_TOKEN_TO_BE_REPLACED