Deadly Monopolies: The Shocking Corporate Takeover of Life Itself--And the Consequences for Your Health and Our Medical Future (Paperback) 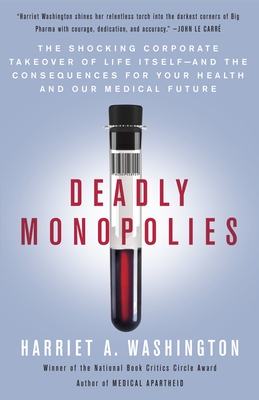 From the award-winning author of Medical Apartheid, an exposé of the rush to own and exploit the raw materials of life—including yours.

Think your body is your own to control and dispose of as you wish? Think again. The United States Patent Office has granted at least 40,000 patents on genes controlling the most basic processes of human life, and more are pending. If you undergo surgery in many hospitals you must sign away ownership rights to your excised tissues, even if they turn out to have medical and fiscal value. Life itself is rapidly becoming a wholly owned subsidiary of the medical-industrial complex.

Deadly Monopolies is a powerful, disturbing, and deeply researched book that illuminates this “life patent” gold rush and its harmful, and even lethal, consequences for public health. Like the bestselling The Immortal Life of Henrietta Lacks, it reveals in shocking detail just how far the profit motive has encroached in colonizing human life and compromising medical ethics.

Harriet A. Washington is the author of Medical Apartheid, which won a National Book Critics Circle Award, the 2007 PEN Oakland Award, and the 2007 American Library Association Black Caucus Nonfiction Award. She has been a fellow in medical ethics at the Harvard Medical School, a senior research scholar at the National Center for Bioethics at Tuskegee University, a fellow at the Harvard School of Public Health, and the recipient of a John S. Knight Fellowship at Stanford University.

“Important. . . . Humane. . . . An extraordinary achievement. . . . Deadly Monopolies explores contentious issues in modern biomedical research that have been aggravated by the field’s commercial emphasis. . . . Washington offers an overarching framework that enables readers to see connections that are often obscured. The book’s brilliance lies in the compassionately told narratives of individuals whose lives have been affected by the increasing corporate control of scientific research.”
—The American Prospect

“Harriet Washington has written an important and compelling book. She shows how recent changes in patent law have caused drug prices to soar, while reducing innovation by drug companies to near-zero. Well-documented, yet highly readable, the book paints a vivid picture of an industry that now exploits monopoly rights to patients’ genes, and relies on taxpayer-funded NIH research for its few novel and important drugs—even as it turns out an endless stream of trivial variations of top-selling old drugs.”
—Marcia Angell, M.D., author of The Truth About the Drug Companies and former editor of the New England Journal of Medicine

“Big Pharma is not going to like Deadly Monopolies one bit, but you probably will—especially if, like most Americans, you’re finding the co-pay on your drugs too much to handle. Washington correctly reminds us that, as hard as high drug costs are in the USA, they are lethal for the world’s poor. Brava Harriet Washington!”
—Laurie Garrett, Pulitzer Prize-winning writer and author of I Heard the Sirens Scream: How Americans Responded to the 9/11 and Anthrax Attacks

“Patents, we’re repeatedly told, are crucial to fostering innovation. Deadly Monopolies reveals how the privatization of medical science is retarding research, putting patients at risk, and making what cures we have exorbitantly expensive. This book is a meticulously documented exposé of what’s gone wrong with our medical innovation system, and a roadmap for change.”
—Merrill Goozner, author of The $800 Million Pill: The Truth Behind The Cost of New Drugs

“[Washington] adeptly details the wide-ranging repercussions of this monopolistic research model and recounts chilling anecdotes that reveal a pattern of shady practices by biotech and pharma companies. . . . The author clearly presents data to elucidate these complex issues, and cogently argues that there are opportunities to reinstate transparency, collaboration and altruism in drug development and disbursement. A gripping, revelatory account.”
—Kirkus Reviews (starred review)

This feature require that you enable JavaScript in your browser.
END_OF_DOCUMENT_TOKEN_TO_BE_REPLACED

END_OF_DOCUMENT_TOKEN_TO_BE_REPLACED

This feature require that you enable JavaScript in your browser.
END_OF_DOCUMENT_TOKEN_TO_BE_REPLACED