Rise to Greatness: The History of Canada From the Vikings to the Present (Hardcover) 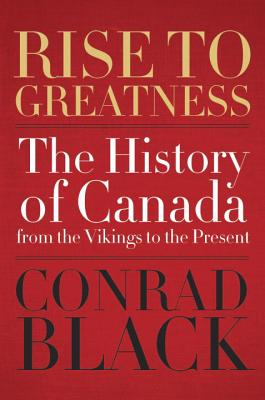 Masterful, ambitious, and groundbreaking, this is a major new history of our country by one of our most respected thinkers and historians -- a book every Canadian should own.
From the acclaimed biographer and historian Conrad Black comes the definitive history of Canada -- a revealing, groundbreaking account of the people and events that shaped a nation.
Spanning 874 to 2014, and beginning from Canada's first inhabitants and the early explorers, this masterful history challenges our perception of our history and Canada's role in the world. From Champlain to Carleton, Baldwin and Lafontaine, to MacDonald, Laurier, and King, Canada's role in peace and war, to Quebec's quest for autonomy, Black takes on sweeping themes and vividly recounts the story of Canada's development from colony to dominion to country. Black persuasively reveals that while many would argue that Canada was perhaps never predestined for greatness, the opposite is in fact true: the emergence of a magnificent country, against all odds, was a remarkable achievement. Brilliantly conceived, this major new reexamination of our country's history is a riveting tour de force by one of the best writers writing today.

CONRAD BLACK is the author of widely acclaimed biographies of Maurice Duplessis, Franklin D. Roosevelt, and Richard Nixon. He was for many years the head of the Argus, Hollinger, and Telegraph Newspaper groups. Black is a financier, and a columnist in the National Post, which he founded, and the National Review Online and Huffington Post. Black served three years in US federal prisons tutoring fellow prisoners for their secondary school matriculations, although all charges against him were eventually abandoned, rejected by jurors, or vacated by the US Supreme Court, and he won the largest libel settlement in Canadian history from his original accusers. He has been a member of the British House of Lords since 2001. He lives in Toronto. The author lives in Toronto.

This feature require that you enable JavaScript in your browser.
END_OF_DOCUMENT_TOKEN_TO_BE_REPLACED

END_OF_DOCUMENT_TOKEN_TO_BE_REPLACED

This feature require that you enable JavaScript in your browser.
END_OF_DOCUMENT_TOKEN_TO_BE_REPLACED