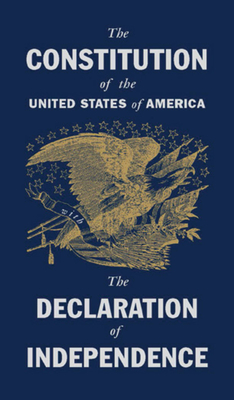 This elegant, portable 4.25" × 7.25" hardcover volume featuring gold and silver foil on its cover contains the two documents every American should read: the complete text of the Declaration of Independence and the Constitution of the United States of America, along with all 27 of its amendments. A full, analytical index of the original Constitution and all of its ratified amendments follows.

We hold these truths to be self-evident, that all men are created equal; that they are endowed by their Creator with certain unalienable rights; that among these are Life, Liberty, and the pursuit of Happiness…

On July 4, 1776, in the midst of the Revolutionary War, the thirteen colonies of the United States ratified a document that would later be known as the Declaration of Independence. In it, the Continental Congress and the people it represented declared they were no longer under the rule of Great Britain and were now the United States.

We the People of the United States, in Order to form a more perfect Union, establish Justice, insure domestic Tranquility, provide for the common defense, promote the general Welfare, and secure the Blessings of Liberty to ourselves and our Posterity…

The Delegates who convened at the Federal Convention in Philadelphia on May 25, 1787, agreed to construct a new framework for a national government. Throughout the next four months, they debated the proper form such government should take, led by their elected president, George Washington.

Once the Constitution was constructed, the debates that ensued in state senates while it was being ratified by each state made clear the need for additions to the basic framework drafted in Philadelphia to protect certain liberties at the core of American traditions. James Madison, then a member of the new United States House of Representative, drafted a list of amendments to guarantee the freedoms that Americans hold dear that would become known as the Bill of Rights.

The documents in this collection are a monument to the combined spirit of all Americans as well as a testament to the extraordinary minds of our founding fathers, who put them on paper.

Whether you are a history buff looking to enhance your library; or you are studying or teaching US government in school or at home and need a sturdy, portable reference; or you simply want to be able to prove that you are right in your political arguments, wherever they may occur—this edition containing the exact, uninterrupted words of America’s founders is what you are looking for.

In the series Classic Thoughts and Thinkers, explore some of the most influential texts of our time along with the inner workings of its greatest thinkers. With works from great American figures such as Theodore Roosevelt and Emily Dickinson and seminal documents including the Constitution of the Unites States, this series focuses on the most reflective and thought-provoking writings of the last two centuries. These beautiful hardcovers are the perfect historical perspective for meeting the challenges of the modern world.
​
Other titles in this series include: As a Man Thinketh, Autobiography of Benjamin Franklin, Collected Poems of Robert Frost, Common Sense, Helen Keller, Narrative of the Life of Frederick Douglass, Selected Poems of Emily Dickinson, and Theodore Roosevelt’s Words of Wit and Wisdom.

This feature require that you enable JavaScript in your browser.
END_OF_DOCUMENT_TOKEN_TO_BE_REPLACED

END_OF_DOCUMENT_TOKEN_TO_BE_REPLACED

This feature require that you enable JavaScript in your browser.
END_OF_DOCUMENT_TOKEN_TO_BE_REPLACED