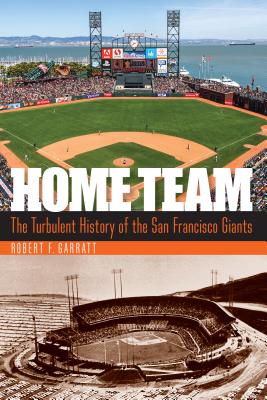 In 1957 Horace Stoneham took his Giants of New York baseball team and headed west, starting a gold rush with bats and balls rather than pans and mines. But San Francisco already had a team, the Seals of the Pacific Coast League, and West Coast fans did not immediately embrace the newcomers.

Starting with the franchise’s earliest days and following the team up to recent World Series glory, Home Team chronicles the story of the Giants and their often topsy-turvy relationship with the city of San Francisco. Robert F. Garratt shines light on those who worked behind the scenes in the story of West Coast baseball: the politicians, businessmen, and owners who were instrumental in the club’s history.

Home Team presents Stoneham, often left in the shadow of Dodgers owner Walter O’Malley, as a true baseball pioneer in his willingness to sign black and Latino players and his recruitment of the first Japanese player in the Major Leagues, making the Giants one of the most integrated teams in baseball in the early 1960s. Garratt also records the turbulent times, poor results, declining attendance, two near-moves away from California, and the role of post-Stoneham owners Bob Lurie and Peter Magowan in the Giants’ eventual reemergence as a baseball powerhouse. Garratt’s superb history of this great ball club makes the Giants’ story one of the most compelling of all Major League franchises.
Purchase the audio edition.

Robert F. Garratt is emeritus professor of English and humanities at the University of Puget Sound. He has published books and articles on modern Irish literature including the recent Trauma and History in the Irish Novel: The Return of the Dead. His baseball articles have appeared in NINE and the SABR BioProject.

"Garratt has crafted an accurate and engaging account of the fascinating journey of a team leaving a New York tradition rooted in East Coast culture and going through the often painful transition to a team now firmly entrenched in the West Coast life of San Francisco. A must read for all fans of the San Francisco Giants!"—Paul K. Howard, NINE

"A significant, authoritative history of the Giants. Baseball fans should read it. Libraries should acquire it."—G. Louis Heath, Aethlon

“A good reason to read Home Team is the chance to get to know Horace Stoneham the way I did. He was a good friend, a hard worker, and a great man. He did a lot for me and for baseball.”—Willie Mays


“Once you begin the journey with Garratt you won’t stop until the first pitch at Pac Bell Park in 2000. Home Team is a must for any baseball fan.”—Marty Lurie, Giants pre- and postgame radio host of the Bay Area’s KNBR 680


“From the boardroom to the courtroom to the ballpark, Rob Garratt touches all the bases. Must-reading for any baseball fan.”—Hank Greenwald, the voice of the Giants (1979–96) and author of This Copyrighted Broadcast

“The vision of Horace Stoneham . . . opened the door for many Latin baseball players, including myself, the Alou brothers, and Juan Marichal, among others. This is an important history of the Giants franchise.”—Orlando Cepeda

This feature require that you enable JavaScript in your browser.
END_OF_DOCUMENT_TOKEN_TO_BE_REPLACED

END_OF_DOCUMENT_TOKEN_TO_BE_REPLACED

This feature require that you enable JavaScript in your browser.
END_OF_DOCUMENT_TOKEN_TO_BE_REPLACED