The Port Chicago 50: Disaster, Mutiny, and the Fight for Civil Rights (CD-Audio) 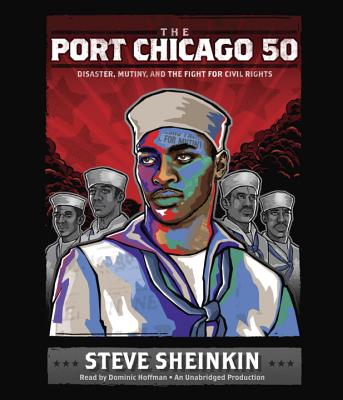 By Steve Sheinkin, Dominic Hoffman (Read by)
$27.00
Email or call for price.

On July 17, 1944, a massive explosion rocked the segregated Navy base at Port Chicago, California, killing more than 300 sailors who were at the docks, critically injuring off-duty men in their bunks, and shattering windows up to a mile away. On August 9th, 244 men refused to go back to work until unsafe and unfair conditions at the docks were addressed. When the dust settled, fifty were charged with mutiny, facing decades in jail and even execution. This is a fascinating story of the prejudice that faced black men and women in America's armed forces during World War II, and a nuanced look at those who gave their lives in service of a country where they lacked the most basic rights.

Steve Sheinkin is the award-winning author of several exciting books on American history for young adults. His 2012 title BOMB: THE RACE TO BUILD AND STEAL THE WORLD'S MOST DANGEROUS WEAPON, was awarded a Newbery Honor, won the Sibert Medal, the YALSA Award for Excellence in Nonfiction for Young Adults, and was a finalist for the National Book Award. His book THE NOTORIOUS BENEDICT ARNOLD won both the YALSA Award for Excellence in Nonfiction and the Boston Globe/Horn Book Award for nonfiction. His most recent titles are LINCOLN'S GRAVE ROBBERS, a true-crime thriller, and EL ILUMINADO, a graphic novel written with Ilan Stavans. Steve lives in Saratoga Springs, NY.

This feature require that you enable JavaScript in your browser.
END_OF_DOCUMENT_TOKEN_TO_BE_REPLACED

END_OF_DOCUMENT_TOKEN_TO_BE_REPLACED

This feature require that you enable JavaScript in your browser.
END_OF_DOCUMENT_TOKEN_TO_BE_REPLACED