The Race for What's Left: The Global Scramble for the World's Last Resources (Hardcover) 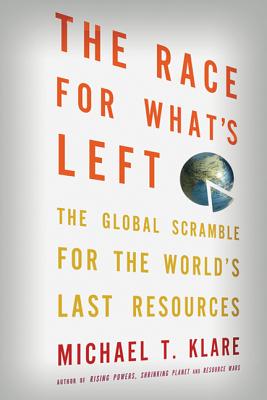 From Michael Klare, the renowned expert on natural resource issues, an invaluable account of a new and dangerous global competition

The world is facing an unprecedented crisis of resource depletion a crisis that goes beyond "peak oil" to encompass shortages of coal and uranium, copper and lithium, water and arable land. With all of the planet's easily accessible resource deposits rapidly approaching exhaustion, the desperate hunt for supplies has become a frenzy of extreme exploration, as governments and corporations rush to stake their claim in areas previously considered too dangerous and remote. "The Race for What's Left" takes us from the Arctic to war zones to deep ocean floors, from a Russian submarine planting the country's flag on the North Pole seabed to the large-scale buying up of African farmland by Saudi Arabia, China, and other food-importing nations.

As Klare explains, this invasion of the final frontiers carries grave consequences. With resource extraction growing more complex, the environmental risks are becoming increasingly severe; the "Deepwater Horizon" disaster is only a preview of the dangers to come. At the same time, the intense search for dwindling supplies is igniting new border disputes, raising the likelihood of military confrontation. Inevitably, if the scouring of the globe continues on its present path, many key resources that modern industry relies upon will disappear completely. The only way out, Klare argues, is to alter our consumption patterns altogether a crucial task that will be the greatest challenge of the coming century.

Michael T. Klare is the author of fourteen books, including "Resource Wars" and "Rising Powers, Shrinking Planet." A contributor to "Current History," "Foreign Affairs," and the "Los Angeles Times," he is the defense correspondent for "The Nation" and the director of the Five College Program in Peace and World Security Studies at Hampshire College in Amherst, Massachusetts.

“Pulls no punches in describing what’s dead ahead... Whether you’re a hard-line climate-denying billionaire capitalist or a liberal-leaning environmentalist, you need to read Michael Klare’s new Race For What’s Left.”—MarketWatch “A first-rate, well-researched wake-up call... Klare has identified the problem in vivid detail.”—The Christian Science Monitor “An outstanding book—exhaustively researched, beautifully written, and convincingly argued.”—History News Network “In a sane world, we’d take the limits we are clearly reaching as a signal to reduce our fixation on growth and begin searching for new ways to live. Instead, as Michael Klare makes clear in this powerful book, the heads of our corporate empires have decided to rip apart the planet in one last burst of profiteering. If you want to understand the next decade, I fear you better read this book.”
—Bill McKibben, author of Eaarth  “If you think oil is the only major thing we’re running short of, think again. Michael Klare has long been farsighted about the many hazards of a resource-hungry world, and this crisp, authoritative survey does more than just show what the other dangers are. It also feels like a guidebook to wars to come.”
—Adam Hochschild, author of King Leopold’s Ghost  “Michael Klare has written a gripping account of the world’s great resource grab and its terrifying implications for the planet. Fortunately, he doesn’t stop there but offers the world a way out through a ‘race to adapt.’ A must read for anyone who wants to understand not only the challenge of our diminishing resources but also what we can do about it.”
—Elizabeth C. Economy, author of The River Runs Black  “Michael Klare is like a beacon shining into the dark and scary wilderness that our future has become. This is an indispensable book for anyone who wants to understand what reality requires of us in the years ahead.”
—James Howard Kunstler, author of The Long Emergency  “If Michael Klare cared more about his wallet than about humanity’s welfare, he could have spent his career earning gazillions as a global trends adviser for Wall Street.  Luckily for the rest of us, he chose people over profit. Now, for the mere price of a book, we all can benefit from Klare’s razor-sharp analysis of where the world is heading—and how we can still change course.”
—Mark Hertsgaard, author of Hot: Living Through the Next Fifty Years on Earth  “Michael Klare has done it again. In clear and compelling prose, The Race for What’s Left shows how resource depletion is accelerating even more rapidly than originally suspected and how competition for scarce resources has intensified. The potential for conflict and environmental catastrophe is frightening. This book is vital for understanding the crossroads we face: either develop green technologies now or fight another round of devastating resource wars. Our future depends upon the choices we make right now.”
—Terry Lynn Karl, author of The Paradox of Plenty