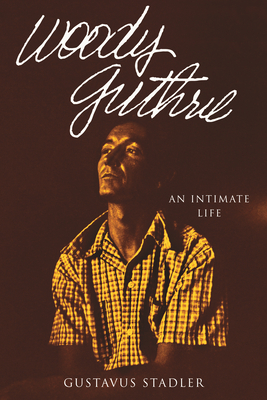 By Gustavus Stadler
$28.95
On Our Shelves Now

Woody Guthrie is often mythologized as the classic American “rambling’ man,” a real-life Steinbeckian folk hero who fought for working-class interests and inspired Bob Dylan. Biographers and fans frame him as a foe of fascism and focus on his politically charged folk songs. What’s left unexamined is how the bulk of Guthrie’s work—most of which is unpublished or little known—delves into the importance of intimacy in his personal and political life. Featuring an insert with personal photos of Guthrie’s family and previously unknown paintings, Woody Guthrie: An Intimate Life is a fresh and contemporary analysis of the overlapping influences of sexuality, politics, and disability on the art and mind of an American folk icon.

Part biography, part cultural history of the Left, Woody Guthrie offers a stunning revelation about America’s quintessential folk legend, who serves as a guiding light for leftist movements today. In his close relationship with dancer Marjorie Mazia, Guthrie discovered a restorative way of thinking about the body, which provided a salve for the trauma of his childhood and the slowly debilitating effects of Huntington’s disease. Rejecting bodily shame and embracing the power of sexuality, he came to believe that intimacy was the linchpin for political struggle. By closely connecting to others, society could combat the customary emotional states of capitalist cultures: loneliness and isolation. Using intimacy as one’s weapon, Guthrie believed we could fight fascism’s seductive call.

Gustavus Stadler is a professor of English at Haverford College. A well-established scholar of nineteenth- and twentieth-century US culture and popular music, he is the author of Troubling Minds: The Cultural Politics of Genius in the U.S., 1840–1890. His writing has appeared in the Bay Guardian, SF Weekly, the North Carolina Independent Weekly, Social Text, Sounding Out!, avidly.com, and numerous other outlets. He lives in Haverford, Pennsylvania.

“Woody Guthrie: An Intimate Life adds powerfully to our understanding of a man who never shied from blending the personal with the political.”
—The Progressive Magazine

“What keeps the book from being merely another entry in a timeworn biographical tradition is that it is an expansive and strikingly unique portrait of a man, not of an immortal legend. An Intimate Life privileges the messiness of character and circumstance, tying together the many Guthries collected under the proper name and placing them in the context of broader social and institutional movements. And here we find the most rewarding and unanticipated delights of the biography: at various stages, one could be forgiven for forgetting that Woody Guthrie was a musician at all.”
—Los Angeles Review of Books

“Zinn’s presentation is crisp and measured, a perfect alignment to provide listeners a view of Guthrie’s fascinating and tragic life.”
—AudioFile

“With revelatory scholarship and a critic’s skeptical touch . . . Stadler retraces Guthrie’s footsteps, most strikingly when Guthrie left few if any traces himself.”
—Greil Marcus, author of The History of Rock ‘n’ Roll in Ten Songs

“Gustavus Stadler helps Woody Guthrie down from his pedestal as dust bowl icon and helps us to see him as the three-dimensional character he really was.”
—Billy Bragg, musician and activist

“A landmark work . . . complicates a story most music fans thought they knew. It will change the way you think not just about Guthrie but about folk music and its political legacies.”
—Ann Powers, author of Good Booty: Love and Sex, Black and White, Body and Soul in American Music

“Like Walt Whitman before him, Stadler’s Guthrie sees no artificial boundary between the needs and urges of the human body and those of the body politic: both can be so robust, and both can be so vulnerable—ultimately, like Guthrie himself. Stadler captures it all.”
—Will Kaufman, author of Woody Guthrie: American Radical

“Stadler’s gorgeous book is both a paean to the Guthrie we know . . . and a revealing look at the embodied Guthrie, who is vulnerable, playful, and lustful . . . . It opens up an important new window into not only Guthrie the man but the history of the twentieth-century American Left.”
—Gayle Wald, author of Shout, Sister, Shout! The Untold Story of Rock-and-Roll Trailblazer Sister Rosetta Tharpe

“Under the cloak of biography, Gustavus Stadler has written a meticulously researched and stunning kaleidoscope of events, music, people, and populist movements that have influenced our lives since. Stadler’s scope for contextualizing Guthrie’s provocative work is expansive—leftist politics, Pete Seeger, Sacco and Vanzetti, gay rights groups, racial violence, the history of psychiatry—and evocative.”
—Michael Bronski, author of A Queer History of the United States

“Groundbreaking . . . provides us with fresh perspectives and important insights into how this iconic figure pushed boundaries in his writing, music, and politics by redefining the role of intimacy.”
—Kip Lornell, coauthor of The Life and Legend of Leadbelly

“Stadler has produced a refreshing, unflinching, and occasionally painful study of Woody Guthrie—exhuming a character more vulnerable than even his most ardent disciples might have imagined.”
—Robert E. Price, author of The Bakersfield Sound: How a Generation of Displaced Okies Revolutionized American Music

This feature require that you enable JavaScript in your browser.
END_OF_DOCUMENT_TOKEN_TO_BE_REPLACED

END_OF_DOCUMENT_TOKEN_TO_BE_REPLACED

This feature require that you enable JavaScript in your browser.
END_OF_DOCUMENT_TOKEN_TO_BE_REPLACED