Ska: The Rhythm of Liberation (Hardcover) 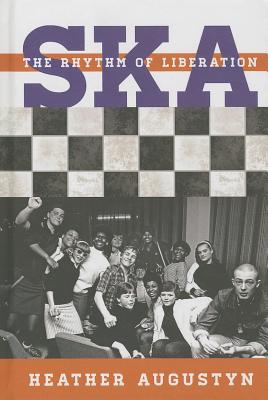 By Heather Augustyn
Email or call for price

Like other major music genres, ska reflects, reveals, and reacts to the genesis and migration from its Afro-Caribbean roots and colonial origins to the shores of England and back across the Atlantic to the United States. Without ska music, there would be no reggae or Bob Marley, no British punk and pop blends, no American soundtrack to its various subcultures. In Ska: The Rhythm of Liberation, Heather Augustyn examines how ska music first emerged in Jamaica as a fusion of popular, traditional, and even classical musical forms. As a genre, it was a connection to Africa, a means of expression and protest, and a respite from the struggles of colonization and grinding poverty. Ska would later travel with West Indian immigrants to the United Kingdom, where British youth embraced the music, blending it with punk and pop and working its origins as a music of protest and escape into their present lives. The fervor of the music matched the energy of the streets as racism, poverty, and violence ran rampant. But ska called for brotherhood and unity. As series editor and pop music scholar Scott Calhoun notes: "Like a cultural barometer, the rise of ska indicates when and where social, political, and economic institutions disappoint their people and push them to re-invent the process for making meaning out of life. When a people or group embark on this process, it becomes even more necessary to embrace expressive, liberating forms of art for help during the struggle. In its history as a music of freedom, ska has itself flowed freely to wherever people are celebrating the rhythms and sounds of hope." Ska: The Rhythm Liberation should appeal to fans and scholars alike-indeed, any enthusiast of popular music and Caribbean, American, and British history seeking to understand the fascinating relationship between indigenous popular music and cultural and political history. Devotees of reggae, jazz, pop, Latin music, hip hop, rock, techno, dance, and world beat will find their appreciation of this remarkable genre deepened by this survey of the origins and spread of ska.

Heather Augustyn is the author of Ska: An Oral History and Don Drummond: The Genius and Tragedy of the World's Greatest Trombonist. She is a newspaper reporter for the Times of Northwest Indiana, an elementary-school writing teacher, and she lives with her husband and two boys in northwest Indiana.

This feature require that you enable JavaScript in your browser.
END_OF_DOCUMENT_TOKEN_TO_BE_REPLACED

END_OF_DOCUMENT_TOKEN_TO_BE_REPLACED

This feature require that you enable JavaScript in your browser.
END_OF_DOCUMENT_TOKEN_TO_BE_REPLACED